Huntingdonshire, Huntingdon, or Hunts, an inland county, bounded on the NE, the E, and the SE by Cambridgeshire, on the SW by Bedfordshire, on the W, the NW, and the N by Northamptonshire. Its outline has considerable indentations and saliencies, but may be described as irregularly four-sided. Its length from NE to SW is 32 miles, its breadth from NW to SE varies from 20 1/2 to 34 miles, its circuit is about 125 miles, and its area is about 372 square miles or 234,218 acres. The north-eastern part is chiefly fen, belonging to the basin of the Nen; while the south-western part is higher land, belonging to the basin of the Ouse. The chief heights are some on the S bank of the Nen; a range from Bedfordshire to near Huntingdon, on the right bank of the Ouse; and an offshoot of the heights of Cambridgeshire. The surface, though nowhere presenting bold or striking features, shows a large amount of pleasing soft scenery. The Nen runs for about 13 miles along the north-western and the northern boundary; the Ouse runs about 21 miles, chiefly through the interior, but partly on the boundaries; and both are navigable here by large boats. A number of streams, cuts, and drains traverse the fens to the Nen, and some of them are also navigable. Two considerable streams, and several small ones, fall into the Ouse; yet they and the rivers and their feeders fail, in many parts, to afford the inhabitants a tolerable supply of water. Three large lakes, called Whittlesea, Ramsey, and Uggmeres, were in the N, and the first was several miles in extent, and afforded excellent sailing and fishing; but all three have, within a recent period, been entirely drained. Numerous pools and marshes also were in the fens, and many of these, with the tracts around them, have likewise of late years been completely drained. The substance of the small hills in the SE is mainly ferruginous sand, that of much of the central tracts is Oxford clay, that of a few portions in the N is stone brash, and that of nearly all other parts is some variety or other of alluvium.

The soils are of many kinds, ranging from strong deep clay, through loam and loamy gravel, to sandy gravel and poor peat; but even very bad kinds are capable, by skilful treatment, of bearing good crops. The fens are mostly bare of trees, but abound with willows, and after being drained they form very fertile land. The higher tracts are mostly in tillage, and the meadows feed and fatten many cattle for exportation to the great towns. Estates are large, and farms commonly range in rental from £50 to £500, and let yearly. Wheat yields averagely about 3 1/2 qrs. per acre; barley, 5 qrs.; beans, 3 qrs. Oats, turnips, rape, and mustard, also are grown. The cattle are of the Leicestershire and the Derbyshire breeds. The sheep are chiefly of the Leicestershire and the Lincolnshire breeds. Hogs and pigeons are reared, and water-fowl and eel used to be plentiful.

According to the census returns issued in 1893, the chief occupations of the people of the county were:—Professional, 754 males and 616 females; domestic, 127 males and 3262 females; commercial, 1137 males and 31 females; agricultural, 8718 males and 244 females; industrial, 5421 males and 1596 females; and "unoccupied," including retired business men, pensioners, those living on their own means, and others not specified, 2785 males and 13,985 females; or a total in the county of 18,942 males and 19,734 females. The number of men employed in the leading industries was as follows:—agricultural labourers, 6530; farmers, 881; and general labourers, 614. The chief occupations of women were—domestic service, with a total of 2765; millinery and dressmaking, 694. There were also in the county 45 blind persons, 56 deaf, 19 deaf and dumb, and 68 mentally deranged.

The G.N.R. enters the county near St Neots and runs northwards through Huntingdon, Holme, and Peterborough. From Holme a branch runs eastwards to Ramsey. From Huntingdon the M.R. runs westwards to Kimbolton and Raunds. The G.E.R. enters the county near St Ives, which is connected with Huntingdon and with March by G.E.R. joint lines. From Needingworth Junction the G.E.R. runs NE to Sutton and Ely, and from Somersham a branch runs NW to Ramsey, where it connects with the G.N.R.

The county contains ninety-nine entire civil parishes and parts of eight others. The ancient county contains seventy-nine ecclesiastical parishes or districts and parts of eight others, most of which are in the diocese of Ely. The municipal boroughs are Huntingdon, Godmanchester, and St Ives. The county town is Huntingdon; the towns with upwards of 2000 inhabitants are Huntingdon, Godmanchester, St Ives, St Neots, and Ramsey; and the market-towns are these and Kimbolton, except that Huntingdon and Godmanchester count as one. The chief seats are Kimbolton Castle, Houghton Hall, Elton Hall, Hinchingbrooke House, Waresley Park, Brampton Manor House, Alconbury House, Alwalton, Connington Castle, Diddington Hall, Gaynes Hall, Gransden Hall, Hemingford House, Paxton Hall, Paxton Park, Priory Park, Ramsey Abbey, Riversfield, Stirtloe House, and Washingley.

Huntingdonshire is governed by a lord - lieutenant, a sheriff, who is also Sheriff of Cambridgeshire, the two counties being joined in the shrievalty, and a county council consisting of 13 aldermen and 39 councillors. It is in the home military district, and in the south-eastern judicial circult, and it lies within the diocese of Ely. The assizes and the quarter sessions are held at Huntingdon, and the Hunts, Beds, and Herts Counties Lunatic Asylum is in the Stotford parish, Beds. For parliamentary purposes the county is divided into southern (or Huntingdon) and northern (or Ramsey), each returning one member. The population of the entire county is 67,761.

The territory now forming Huntingdonshire was inhabited in the ancient British times mainly by the Iceni, partly by the Cattieuchlani; was included by the Romans in their Flavia Cæsariensis, and was divided by the Saxons between Mercia and East Anglia, and was called by them Huntandunescyre. The earldom of Huntingdon, even in the Saxon times, but especially from the Conquest till the time of Edward I., seems to have figured largely for the whole county, and to have been a considerable power, and it is alleged, though on no very good authority, to have been held, or at least claimed, for some years by the celebrated but legendary and equivocal character Robin Hood. The county made no particular figure in subsequent history, yet shared in some of the most stirring events. The Romans had a camp at Chesterton, and stations called Durolipons and Durobrivæ, the former at Huntingdon or Godmanchester, the latter at Water Newton on the Nen, and their roads Ermine Street and Via Devana traversed the county. Castles of the middle ages were at Huntingdon and Kimbolton, great abbeys were at Ramsey and Sawtry St Judith, a priory was at St Ives, and Norman churches, which have left remains of their architecture to the present day, were at Alwalton, Conington, Hartford, and Leighton Branswold.

The Chapman code for Huntingdonshire is HUN.
Chapman codes are used in genealogy as a short data code for administrative areas, such as county and country names.

The Historical Directories web site have a number of directories relating to Huntingdonshire online, including:
Kelly's, Pigot, Slater, etc.

We have transcribed the entry for Huntingdonshire from the following:

A listing of the Hundreds in Huntingdonshire, with the parishes contained in them.

The Return of Owners of Land in 1873 for Huntindonshire is available to browse.

Old map of Huntingdonshire circa 1895 (Gazetteer of England and Wales)

A listing of the Poor Law Unions in Huntingdonshire, with the parishes contained in them. 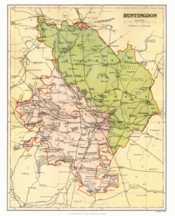