Hertfordshire or Herts, an inland county, bounded on the NW by Beds, on the N by Cambridgeshire, on the E by Essex, on the S by Middlesex, on the SW by Bucks. Its outline is very irregular, but may be described as ovoidal, extending from NE to SW, pretty regular in the NE half, but very much indented in the SW half. Its E boundary, from about the middle southward, is traced by the rivers Stort and Lea. It greatest length is about 39 miles; its greatest breadth is about 27 miles; its circuit is about 135 miles, and its area, according to the returns furnished by the Ordnance Survey Department, is 406,161 statute acres. Its general appearance, though not strictly picturesque, is diversified and very pleasant. A portion of the Chiltern Hills is in the NW and the W, and has elevations of 904 feet at Kensworth and 664 at Little Offley. A range of high ground strikes from the neighbourhood of Kings Langley toward Berkhampstead and Tring, and in many parts commands extensive views. Another high ridge goes from St Albans in a north-westerly direction toward Market Street, and several other ridges run nearly parallel with this from the vicinity of Sandridge, Wheathampstead, and Whitwell. Vantage-grounds to the S command charming views over Middlesex to the hills of Surrey, and scenes around Ware, North Mimms, Watford, Berkhampstead, Hemel Hempstead, and other places are very beautiful. Much beauty also is given to even the more common landscapes by parks, groves, and the prevalence of high live hedges, intermixed with fine trees. The chief rivers are the Lea, the Rib, the Beane, the Quin, the Colne, the Ver, the Maran, and the New River. Mineral springs are at Barnet, Clothall, Northaw, and Watton. Small pendicles on the NW and N border consists of upper greensand and gault; the great bulk of the county, from end to end, consists of chalk, and a considerable tract along the SE and the S, contiguous to Essex and Middlesex, consists of lower eocene formations, chiefly London clay and plastic clay.

A very small proportion of the area is waste or common, a fair proportion is under wood, and the rest, excepting what is occupied by towns, buildings, ways, and water, is all arable. The prevailing soils are loam and clay, and the former occurs in almost all varieties, more or less intermixed with chalk or sand.

The farms commonly range from 160 to 400 acres, and are held either yearly or on lease of seven to fourteen years. The grass lands are used more for hay than for pasturage. Many orchards are in the SW, and produce chiefly apples and cherries. The cattle are principally of the Suffolk, Hereford, Devon, and Welsh breeds. The sheep are mostly Southdowns and Wiltshires, or a breed between the Cotswolds and the Leicesters. The horses for farm-work are the Suffolk punches and a few Lincolns. Hogs, from the adjoining counties, either pure or crossed, are fed on most farms.

Herts is chiefly famous for its agricultural produce, but it has a few manufactures, chiefly the making of straw-plait, of paper, silk weaving, canvas-making, and coach-building. There are a good many millers, brewers, and maltsters, and tanning, currying, and brick, tile, and drain pipe making are carried on.

The Grand Junction Canal traverses the SW, and the Lea navigation goes from Hertford along the E toward the Thames. The G.E.R. goes partly along partly near the E border, and sends off branches to Buntingford and Hertford. It also opened a new line from Edmonton and Cheshurst in 1890. The G.N.R. goes along the centre, past Barnet, Hatfield, Welwyn, and Hitchin, and sends off one branch from Hatfield to St Albans, another to Harpenden, Luton, and Dunstable, and another from Hitchin along the N border to Royston. The M.R. Company's line from St Pancras runs NE between the G.N. and L. & N.W lines, passing through St Albans to Luton and Bedford. A branch from Bedford to Hitchin connects it with the G.N.R., and there is a line from Harpenden to Boxmoor, connecting the L. & N.W.R. and the M.B. The L. & N.W.R. traverses the SW border, past Watford, Berkhampstead, and Tring, and sends off a branch from Watford to St Albans and Rickmansworth. The Metropolitan Extension Line passes through the SW corner of the county, and has a station at Rickmansworth. By means of these lines there is ample communication with London and with all parts of the country, and no place in the county is more than five miles from a railway station.

The county is governed by a lord-lieutenant and a county council consisting of 54 councillors and 18 aldermen. It is in the home military district and judicial circuit. Assizes and quarter sessions are held at Hertford and St Albans. Herts formerly returned one member to Parliament for Hertford and three for the undivided county, but by the Redistribution of Seats Act of 1885 the town of Hertford was disfranchised, and the county now returns four members in four divisions. The population of these divisions is as follows:—Northern or Hitchin division, 48,437, eastern or Hertford division, 54,574; mid or St Albans division, 53,261; western or Watford division, 63,890. The population of the entire county is 220,162.

The territory now forming Hertfordshire was chiefly possessed, prior to the Roman invasion, by the Casii or Cattieuchlani, became part of the Roman Flavia Cæsariensis, and was divided in the Saxon times between the East Saxon and the Mercian kingdoms. The Danes in the time of Alfred menaced it by going up the Lea, but were checked by the diverting of the Lea's waters into another channel. William the Conqueror's march through it was checked and modified by the Abbot of St Albans. The barons in the time of Edward II. encamped at Wheathampstead. Many of the ringleaders of the insurrection under Wat Tyler were executed at St Albans, where the king, with a guard of 1000 men, attended. Two sanguinary battles, in the war of the Yorkists and the Lancastrians, were fought in 1455 and 1461 at St Albans. An early exploit of Cromwell, when he was yet only captain of his own troop of horse, consisted in seizing the high sheriff of the county on his way to St Albans to denounce the parliamentary men as traitors. The Roman roads Watling Street, Icknield Street, and Ermine Street traverse the county. Roman stations were at Verulam and Brockley Hill, and Roman camps at other places. Roman coins have been plentifully found at Newsells and Ashwell. A Danish camp is at Ravensburgh, and barrows are at Stevenage and Widford. Old castles are at Hertford, Berkhampstead, Kings Langley, Bishops Stortford, Rye House, and Standon. Ancient monastic edifices are at St Albans, Ware, Boyston, Sopwell, Rownea, and Cheshunt; a Templars' preceptory was at Temple Chelsing, and old churches are at Baldock, Royston, Kensworth, Tewin, and Ayot St Lawrence.

The Chapman code for Hertfordshire is HRT.
Chapman codes are used in genealogy as a short data code for administrative areas, such as county and country names.

The Historical Directories web site have a number of directories relating to Hertfordshire online, including:
Kelly's, Pigot, Slater, etc.

We have transcribed the entry for Hertfordshire from the following:

A listing of the Hundreds in Hertfordshire, with the parishes contained in them.

Old map of Hertfordshire circa 1895 (Gazetteer of England and Wales)

A listing of the Poor Law Unions in Hertfordshire, with the parishes contained in them.

The Visitations of Hertfordshire, 1572 and 1634. Edited by Walter C. Metcalfe, F.S.A. is available on the Heraldry page. 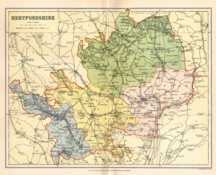