Stithians, St, a parish in Cornwall, 4 miles SW of Redruth, and 3 miles from Perranwell station on the G.W.R. It has a post office under Perran Arworthal; money order and telegraph office, Redruth. Acreage, 4361; population, 1768. There is a parish council consisting of twelve members. There are tin veins, powder mills, paper mills, Druidical stones, and ancient sculptured crosses. The living is a vicarage, united with Perran Arworthal, in the diocese of Truro; net value, £260 with residence. Patron, Viscount Falmouth. The church is ancient, and has been twice restored. There are Wesleyan and Bible Christian chapels. A fair is held on the Monday before 13 July for horses and cattle.

The register dates from the year 1623.

The church of St. Stythian is a building of granite in the Decorated and Perpendicular styles, partly erected in the reign of Edward III. and consists of chancel, nave, aisles, north porch and an embattled western tower, with pinnacles, containing 4 bells, cast in 1767 and 1790: the nave and north aisle are Decorated and the tower and south aisle Perpendicular: the chancel, restored in 1862, retains a piscina: the east window is a memorial to William Charles Watson L.R.C.P. died 1898; the baptistery window to Lieut. John Wright R.N. and there are others to Richard Lanyon, d. 1863, Thomas Reed, d. 1812, and Thomas Horker, d. 1855: the rood stairs remain in the north wall, and over the entrance thereto is a brass plate, inscribed in old English text, with twelve admonitory English verses, arranged in couplets and addressed both to pastors and people, but without date: the monuments are modern: the church was thoroughly restored in 1873, at a cost of about £700, and again in 1886, at a cost of £150, and has 330 sittings. 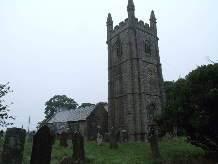 We have transcribed the entry for St Stithians from the following:

Online maps of St Stithians are available from a number of sites: