We have transcribed the entry for Thornhill from the following:

Thornhill is an ancient manor and tithing in Stalbridge, and is reputed to be the birthplace, in 1675, of Sir James Thornhill, the eminent painter (although there is an interpolated entry in Melcombe Regis parish register indicating his baptism on 7th September 1675 in a different hand to that of the parish clerk). His ancestors had resided here in the old manor house for centuries, but his brother, Robert Thornhull, esq. sold the estate to Sir William Pynsent, bart. Some years later, Sir James Thornhill purchased the estate, demolished the old manor house, and designed and built the present, Palladian style, Thornhill House in 1725. To commemorate the accession of George I. to the throne he also erected an obelisk in the park, which was partly blown down in a great storm on the 30th Nov. 1836. John Thornhill, son of Sir James, sold the estate in 1770, which then passed through a number of hands before being purchased, in 1828, by William Boucher esq.

The Boucher family were great benefactors: William Boucher, esq. founded Boucher's charity in 1818, which helped to provide for six pensioners resident in the parish and members of the Church of England, preference being given to those living in Thornhill. His son, the Rev. Henry Boucher, considerably augmented the charity and rebuilt the obelisk in Thornhill park. The Rev. William Boucher entirely rebuilt the tower of the parish church of St. Mary, Stalbridge, at his own cost, in 1868. 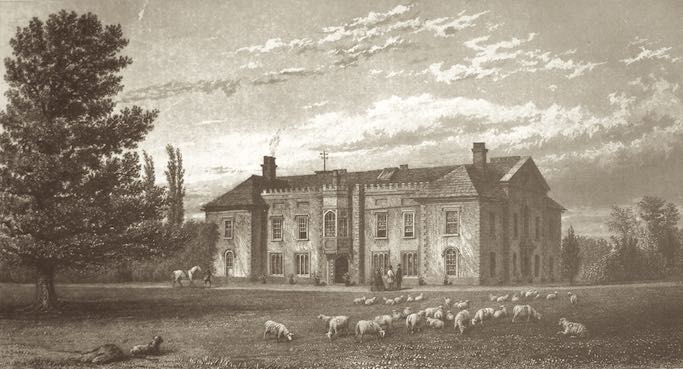 Thornhill House, from an engraving by J. H. Le Keux.