Erth, St, a village and a parish in Cornwall. The village stands on the river HayIe, near the head of St Ives bay, and has a station on the G.W.R. 315 miles from London, and 4 NE of Marazion. It has a bridge said to be 500 years old; has also, on an eminence in its centre, an ancient cross with rude sculpture of a figure of Christ. In the churchyard there are two remarkable ancient crosses. It has a post office under Hayle; money order and telegraph office, Hayle. The parish comprises 4042 acres; population, 1985. Trewinnard, now a farmhouse, belonged to the Trewlnnards, the Mohuns, and others, and became the residence of Sir Christopher Hawkins, Bart. Some remains of tapestry are in this house, and the ruin of a gilt coach, said to have been the first carriage introduced to Cornwall, is at the stables. Tredrea was the seat of Davies Gilbert, Esq., president of the Royal Society. An ancient camp occurs at Bosence, and there are fragments of an ancient chapel. The living is a vicarage in the diocese of Truro; value, tithe and 106 acres of glebe, £288. Patrons, the Dean and Chapter of Truro. The church stands near the bridge at the village, is old, and contains some monuments. There are a Wesleyan and a mission chapel.

The register dates from the year 1563.

The church of St. Ercus, dating from about the 15th century, is a building of stone, in the Perpendicular style, consisting of chancel, nave, aisles, south porch and an embattled western tower 54 feet high, with pinnacles, and containing 3 bells, the treble and tenor dated 1783 and the second 1820: a curious feature of the building is that the arcades of six bays which divide the nave and aisles rise gradually from the west end, suggesting that the original floor was laid in steps: the stained east window is a memorial to Lawrence H. O. Woodd; and in the south aisle is a memorial window to the Rev. Alfred Wilson Mills M.A. vicar 1864-86, presented by the parishioners in 1886: in the north aisle portions of the old carved oak beams remain: the monuments, all of modern date, are both numerous and costly: in 1873-4 the church was almost entirely rebuilt on the old lines as far as possible with the old materials ; the chancel repaired, a new organ erected and the church re-seated throughout at a total cost of £3,000: in 1913 the Trewinnard chapel was restored: there are sittings for 306 persons: the churchyard has been enlarged; within it, and near a flight of steps, stands the head of an ancient cross, elegantly carved as a quatrefoiled rose, with five large bosses, and four smaller ones between the leaves. 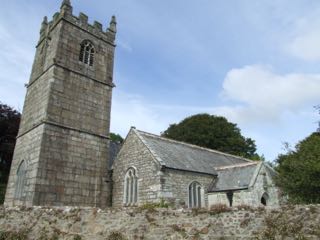 We have transcribed the entry for St Erth from the following:

Online maps of St Erth are available from a number of sites: