Herefordshire or Hereford, an inland county of England, contiguous to Wales. It is bounded on the NW by Radnorshire, on the N by Salop, on the NE by Worcestershire, on the E by Worcestershire and Gloucestershire, on the SE by Gloucestershire, on the S by Gloucestershire and Monmouthshire, on the W by Brecknockshire and Radnorshire. Its outline has considerable curves and saliencies, yet may be described as proximately circular. Its greatest length, from N to S, is 38 miles, its greatest breadth; from E to W, is 35 miles; its circumference is about 180 miles, and its area is 537,363 acres. Its northern boundary is traced at intervals by the river Teme, and its southern boundary is traced by the rivers Wye and Monnow. Its eastern border is marked to a considerable extent by the Malvern Hills, its western border by the Black Mountains, and its interior is a rich diversity of hill and valley, closely resembling some parts of Kent, well wooded, beautiful, and picturesque. The chief streams, besides the Teme, the Wye, and the Monnow, are the Lugg, the Arrow, the Frome, the two Leadons, the Garron, and the Dore. The streams with their flanks are generally charming, and the Wye, which not only traces part of the boundary but also traverses very much of the interior, is pre-eminently lovely. A tract in the NW, contiguous to Wales and to Salop, and a tract in the E, between the rivers Frome and Wye, consist of upper Silurian rocks, and nearly all the rest of the county is old red sandstone. Iron was worked by the Romans, limestone is found at Ledbury, Aymestry, and Woolhope, and small quantities of fuller's earth, pipe-clay, and ochre occur in some places. The county formed a considerable part of Siluria.

The soil in general is a mixture of clay and marl, with occasional beds of gravel, and is peculiarly adapted to the growth of orchard and timber trees. Estates and farms are large. Orchards are everywhere numerous; have been cultivated since the time of Charles I.; occupy in some instances from 30 to 40 acres each; contain about twenty choice varieties of apple for cider, and about seven of pear for perry; and yield on the average from 300 to 375 bushels of fruit per acre. The oxen are a very fine breed, of large size and red-brown colour, with white faces and soft coats. They were introduced about the middle of the 17th century by Lord Scudamore. The sheep are a cross between the Ryeland and the Leicester. The horses are of medium goodness, and many draught ones are reared. Manufactures are on a very small scale, and consist chiefly in gloves, hats, and woollens. The railway system of the county is very complete, and practically converges at Hereford. A G.W. line runs SW from Hereford through Pontrilas and Abergavenny. A second line runs SE to Ross, whence one branch goes SW to Monmouth, while another goes E to Gloucester. A third line runs E to Dedbury, where it branches off NE to Malvem, and SE to Gloucester. Due N from Hereford the G.W. and L. & N.W. Joint line runs through Leominster to Shrewsbury, while a branch of the G.W.R. from Worcester crosses it at Leominster, and runs W to New Radnor, with branches to Presteign and Eardisley. The M.R. has a line running W from Hereford through Hay into Brecknockshire, and Hay is connected with Pontrilas by the Golden Valley line.

Herefordshire is governed by a lord-lieutenant and a county council consisting of 51 councillors and 17 aldermen, is in the north-western military district, and in the Oxford judicial circuit. The assizes and the quarter sessions are all held at Hereford. It has one court of quarter sessions, and eleven petty sessional divisions. The boroughs of Hereford and Leominster have separate commissions of the peace, and the borough of Hereford has in addition a separate court of quarter sessions. County courts are held at Hereford, Leominster, Ross, Kington, Bromyard, and Ledbury. Three members were formerly returned to Parliament by the county, and the boroughs of Hereford and Leominster returned two and one respectively; but by the Redistribution of Seats Act, 1885, the county was divided into the Northern or Leominster division, and the Southern or Ross division, each returning one member; Hereford was deprived of one member, and Leominster was disfranchised. The entire county is in the diocese of Hereford, except part of the parishes of Cowleigh and West Malvern (diocese of Worcester), parts of the parishes of Cwmyay and Dixton (LIandaff), the parish of Lea, and parts of the parishes of Holy Trinity, Forest of Dean, Gorsley, and Preston (Gloucester and Bristol).

The territory now forming Herefordshire, as already noted, was in the time of the ancient Britons part of the country of the Silures, and it then bore the name of Ercinac. The Silures made most strenuous opposition to the Romans; they had a great general, the famous Caractacus, who put the Roman tactics to severe test, yet they were defeated, even under Caractacus, by Ostorius Scapula, at Coxwell Knoll, and they suffered final reduction in the time of Vespasian by Julius Frontinus. Herefordshire then became part of Britannia Secunda, and on the recall of the Roman legions from Britain it sustained repeated invasion by the Picts and Scots, and it was one of the last of the British territories which submitted to the Saxon authority. It at length became part of Mercia, and was then so vexed and harassed by the Welsh that Offa, the great King of Mercia, constructed the very long defensive work still known as Offa's Dyke, for protection of its inhabitants. It nevertheless was disastrously overrun in 1066 by Llewelyn ap Gryffydd, Prince of Wales, and eleven years later made a ready and complete submission to the Norman yoke. The Welsh continued to trouble it, but were kept in check or repelled by special local measures, first of the Conqueror, next of Edward I. Strong movements were made on the rebel side in the Barons' Wars, but were put down ignominiously by the Crown. Owen Glendower in 1402 overran and ravaged it, defeated the Earl of March who defended it, and threw him into a dungeon. An army of 23,000 was raised in 1461 on the side of the Yorkists, went into battle with the forces of Henry VI., or rather of Queen Margaret, at Mortimer's Cross, near Leominster, and totally defeated them. The only subsequent events of any note are those mentioned in our article on HEREFORD, as having occurred in that city in connection with the Civil Wars of Charles I.

A cromlech is on King Arthur's Hill. Ancient British camps, or camps which may have been originally British, are at Hereford Beacon, Dynedor, Eaton Hill, Great Doward, Little Doward, Geer, Caradoc, Berrington, Credenhill, Aconbury, Croft, Wapley, Burghill, Wall Hill, Ivington, Pisbury, and St Ethelbert's. Roman camps or stations are at Kenchester, Trewyn, Grandison, Stretton, Brandon, and Bury Hill near Ross. Watling Street enters near Leintwardine, passes by Kenchester, and quits the county near Longtown; a Roman road from Gloucester also enters near Ross, and a branch of one from Worcester goes to Kenchester. Offa's Dyke touches the W side of the county. No fewer than twenty-eight castles or forts are known to have been erected for defence against the Welsh, but most of them have been demolished, and the chief ones now standing, or having any remains, are at Goodrich, Clifford, Bredwardine, Brampton Bryan, Wilton, Penyard, Huntingdon, Lyon Hall, Sugwas, and Wigmore. The principal old ecclesiastical fabrics, whether monasteries or churches, are at Aconbury, FIanesford, Abbeydore, Leominster, Hereford, Garway, Wigmore, Holm Lacy, Craswall, Monkland, and Wormsley.

The Chapman code for Herefordshire is HEF.
Chapman codes are used in genealogy as a short data code for administrative areas, such as county and country names.

The Historical Directories web site have a number of directories relating to Herefordshire online, including:
Kelly's, Pigot, Slater, etc.

We have Pigot & Co.'s Directory of Herefordshire, 1835 available to browse.

We have Pigot & Co.'s Directory of Herefordshire, 1842 available to browse.

We have transcribed the entry for Herefordshire from the following:

A listing of the Hundreds in Herefordshire, with the parishes contained in them.

The Return of Owners of Land in 1873 for Herefordshire is available to browse.

Old map of Herefordshire circa 1895 (Gazetteer of England and Wales)

A listing of the Poor Law Unions in Herefordshire, with the parishes contained in them. 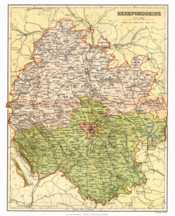