Comberton, Great, a village and a parish in Worcestershire, on the river Avon, under Bredon Hill, 2 miles E by N of Eckington station on the M.R., and 2½ S.S.E of Pershore, which is the post town. Acreage, 965; population, 202. The living is a rectory in the diocese of Worcester; value, £100 with residence. The church is ancient, and was restored in 1885. 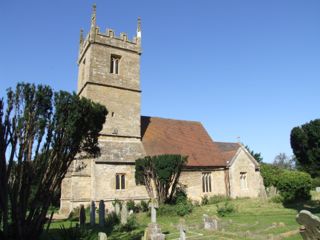 The church of St. Michael is an ancient building of stone, chiefly in the Decorated style, consisting of chancel and nave, with a waggon roof of great interest, and an embattled western tower, with pinnacles, containing a clock and 6 bells, of which one bell and the clock were added in 1869: the chancel was rebuilt in 1861, exactly in accordance with the original design, and new windows inserted at the east end; the four blocked side windows were also re-opened and glazed: the church was further restored in 1885, the chancel arch being rebuilt and a vestry added: in 1890 an organ chamber was erected, and in 1892 an organ was provided, both being the gifts of a parishioner: the stained east window was placed in 1894 as a memorial to Miss Lucy Phipps; there is another placed by the rector in 1900 to his parents, and one to the memory of Miss Martha Phipps, besides a brass to the Rev. C. H. Parker, rector 1826-83; one to Miss Martha Phipps, and a third to the Rev. F. R. Jobling, rector 1883-7: the reredos of oak was presented by the Rev. Nathaniel Shelmerdine, rector 1887-1906: the church affords 150 sittings.

We have transcribed the entry for Great Comberton from the following:

Online maps of Great Comberton are available from a number of sites: