Elmley Castle, a village and a parish in Worcestershire. The village stands near the boundary with Gloucestershire, under Bredon Hill, 3 miles NW of Hint-on station on the M.R., 4 SE of Pershore, and 4½ SW by W of Evesham, and has a post office under Pershore; money order and telegraph office, Pershore. It was once a market-town. The parish comprises 2062 acres, and includes the hamlet of Kersoe; population of the civil parish, 305; of the ecclesiastical, 374. Elmley Castle is the chief residence. A castle stood within the parish on Bredon Hill, and belonged to the D'Abitots and the Beauchamps; only the foundations now exist. The living is a vicarage, united with Netherton, in the diocese of Worcester; gross value, £258 with residence. Patron, the Bishop of Worcester. The church is chiefly Perpendicular, and was restored in 1879; it has a square tower, and contains some ancient monuments. A curious sun-dial stands in the churchyard, and an old market cross in the village. There are also ruins of a Norman chapel at Netherton.

The register dates from the year 1665. 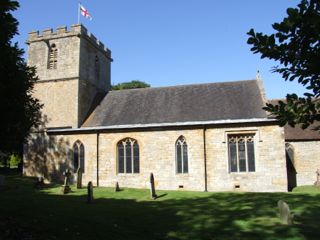 The church of St. Mary is an ancient building of stone, consisting of chancel, nave, aisles, north porch and an embattled western Norman tower containing a clock and 6 bells: the chancel was restored in 1863 at the cost of the Ecclesiastical Commissioners; the cost of the lofty chancel arch and stained windows being defrayed by Lady Hampton and the Rev. W. Parker M.A. a former rector of Little Comberton: the organ was presented by Mr. Hill: in the north aisle is a handsome monument dating from 1531, with three life-sized recumbent figures, to the Savage family, and another to Thomas, 1st Earl of Coventry, who died 15th July, 1699: the church was restored in 1878, at a cost of £1,700, under the direction of Mr. Preedy, when the nave and aisles were newly roofed and the windows renewed: during the progress of the work some portions of Norman carving, the old entrances to the rood loft, and painted wall decorations were discovered; a coped tombstone, with a fine early 13th century cross, was also found beneath the floor: the stained east window was presented by Lieut.-Gen. H. P. Davies, of Elmley Castle, and there is an octangular shaped font, on the base of which are four carved figures: the church affords 300 sittings.

We have transcribed the entry for Elmley Castle from the following:

Online maps of Elmley Castle are available from a number of sites: