Croome, Earls, a parish in Worcestershire, 1½ mile NE of Upton-on-Sevem, and 9 miles S of Worcester. Post town, Worcester; money order and telegraph office, Upton-on-Sevem. Acreage, 1153; population, 235. The living is a rectory in the diocese of Worcester; net value £108 with residence. The church is ancient, partly Norman.

The parish register dates from the year 1659. 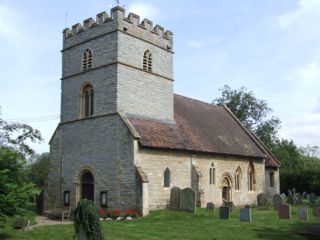 The church of St. Nicholas is a building of stone, in the Norman and later styles, consisting of chancel, nave, and a low modern embattled western tower, partly covered with ivy, containing 5 bells: the chancel arch is Norman, and on each side of the nave and at the tower entrance are handsome Norman doorways: in 1869 the church was reseated, and in 1875 the chancel floor was relaid: there are several stained windows: there are 100 sittings. In 1902 a lych gate was erected by the late Hon. Mrs. Frederick Standish O'Grady (d. 1910), in memory of her parents, the Hon. W. J. Coventry, d. 11 Mar. 1877 and Mary his wife, d. 29 Sept. 1892.

We have transcribed the entry for Earls Croome from the following:

Online maps of Earls Croome are available from a number of sites: