Bushley, a village and a parish in Worcestershire, on the Severn, 1½ mile NNW of Tewkesbury, with a post office under Tewkesbury, which is the money order and telegraph office. Acreage of parish, 1834; population, 306. Pull Court, the seat of the lord of the manor, is situated in an extensive well-wooded park, which contains some fine cedars of Lebanon; the mansion was rebuilt in 1835. The manor belonged formerly to the Abbey of Tewkesbury, and in the reign of James I. came into the possession of the Dowdeswell family, in whose hands it has remained till the present day. The living is a vicarage in the diocese of Worcester; gross value, £355. The church was rebuilt in 1843, the chancel being erected by Sir Gilbert Scott in 1865. It contains monuments to the Dowdeswell family, among which is one to William Dowdeswell, who was Chancellor of the Exchequer in 1765, and bears an epitaph from the pen of Edmund Burke; there is an ancient brass. 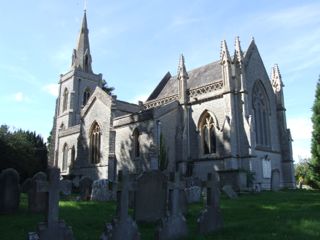 The church of St. Peter is a cruciform building of stone, chiefly in the Perpendicular style, rebuilt in 1843, under the direction of Mr. Blore, at a cost of £5,000 given by the Rev. Canon Dowdeswell, of Christ Church, Oxford, and consists of chancel with south chapel, nave, transepts and a western tower with pinnacles and spire, containing a clock and 6 bells: the base of the tower forms a west porch: the chancel, erected in 1857, at the expense of the late William Dowdeswell esq. from designs by the late Sir George Gilbert Scott R.A. replaces a shallow quasi-chancel previously projecting from the east end, and is a spacious and dignified structure in the Decorated style of the 14th century; the chancel screen is of iron: the reredos, presented in 1902, is a memorial to Mrs. Dowdeswell: the roof and seats are finely carved in solid oak, and there are some good stained windows, including one in the south transept to William Dowdeswell esq. d. 1887, and a fine monument, erected in 1777, to the Right Hon. William Dowdeswell, Chancellor of the Exchequer in 1765-6, who died at Nice in 1775; the epitaph was written by Edmund Burke; there are other memorials to Roger Dowdeswell, 1633; Richard Dowdeswell, 1673; William Dowdeswell, 1683; George Dowdeswell M.D. 1773; and others of this family, including a modern brass to the Rev. Dr. Dowdeswell, who died in 1849: there remains one ancient brass, with effigies of a man and woman, to Thomas Payne, ob. 1500: the communion plate includes a flagon, bearing the arms of the Dowdeswell family, given by Mrs. Elizabeth Dowdeswell in 1723: the church affords sittings for 184 persons.

We have transcribed the entry for Bushley from the following:

Online maps of Bushley are available from a number of sites: