Durham, a maritime county in the north-east of England, bounded on the N by Northumberland, on the E by the German Ocean, on the S by Yorkshire, and on the W by Westmorland and Cumberland. Its boundary line along the north is chiefly the rivers Derwent and Tyne, along the south the river Tees. Its outline is somewhat triangular, one side extending east-north-eastward, another southward, another west-north-westward. Its greatest length from east to west is about 45 miles, its greatest breadth from north to south about 35 miles, its circuit about 140 miles, its area 647,281 acres. The surface for the most part is either mountainous, hilly, or undulated. The western angle is crossed by the chain of uplands known as the backbone of England, and presents a bleak, moorish, and barren appearance. The tract next to that angle is traversed by ribs from the backbone— lateral and lower ranges of hill spreading in various directions, and it shares much in the sterility of the extreme west, yet has strips of good land and fine scenery along the courses of the principal streams. The central tracts are pleasantly varied with hill and dale, and include some beautiful and fertile valleys. The eastern tract is more champaign, yet abounds in swells, vales, and dells, and embosoms many a picturesque spot. The coast or seaboard is generally bare and tame—much of it destitute of any Interesting feature— other parts redeemed from dreary monotony mainly by the outbreak of ravines and glens, and It presents no considerable headland except the bold and nearly insulated one at the town of Hartlepool. The main streams are the Tyne, the Wear, and the Tees; the chief tributary streams are the Derwent to the Tyne, and the Skerne to the Tees; and the secondary or minor affluents are the Urpeth, the Browney, the Sleekburn, the Gaunless, the Bedburn, and many brooks or becks. Magnesian limestone forms the coast from South Shields to Hartlepool, new red sandstone extends thence southward to the Tees, and westward up the lower part of the Tees valley; a coal formation connected with the coalfields of Northumberland and Yorkshire occupies a space of about 25 miles by 10 in the central and northern parts of the county, and constitutes the most important coal-field in the British Islands; and millstone grit, shale, sandstone, and carboniferous limestone severally or variously occur in the west. Dykes of basalt or greenstone cross the coal measures and extend to the sea, and these in many parts have charred the contiguous coal into cinder, and effected much change on sulphur and other minerals. The limestone is 70 feet thick near Sunderland, and fully 400 feet deep at Hartlepool, and it serves to be quarried, to be calcined, for polishing as marble, and yields galena and a few fossils. The coal presents no fewer than about 40 beds from 3 to 10 feet thick, and is worked in one place near Painswick to a depth of 1800 feet.

The chief mineral product of Durham is coal, of which it is normally the largest producer of any single county in the kingdom. Perhaps the most striking proof of this was given in 1892, when, notwithstanding the miners' strike, which practically brought work to a stand for some months, the production was 23,834,000 tons, valued at £7,398,480. The production of coke from Durham coal is a large industry. Salt is produced to the extent of 180,000 tons per annum, and pig-iron manufactured in this county with Northumberland exceeds 600,000 tons, though the quantity of iron ore mined if only some 3500 tons. Another mineral product is lead ore, of which the output exceeds 6000 tons.

A stiff loam, very fertile, extends from the mouth of the Tees toward Hartlepool; a poor thin clay extends thence along the coast to within a few miles of Sunderland; a loamy or a rich clay lies along much of the sides of many of the streams; a dry friable loam, sometimes shallow and poor, sometimes deep and rich, covers many of the hills across the whole county west of Bishop-Auckland and north of Barnard Castle; and other soils, ranging through all sorts of clay, loam, sand, and gravel, on to sheer, thin, moorish peat, occupy other parts.

The gardens and the orchards are not remarkable, but there are some fine oak woods. Agriculture is secondary to mining and manufactures, and has not undergone so much improvement as In some other counties, yet, on the whole, is in a tolerably advanced condition. Approved new practices in it have been encouraged and promoted on the estates of the great landowners, who still maintain a degree of the old feudal influence over their tenants, particularly on the Londonderry, the Lambton, the Raby, the Ravensworth, and the Bishopric estates. Farms on these properties average from 150 to 200 acres. Draining has been effected to a great extent and at large cost. The farms in the uplands are managed generally on the two-crop and fallow system, and on the light soils along the coast on a four-course system, and obtain good returns of potatoes, turnips, beans, and some other crops. The cattle are a large superior breed, called the Durham shorthorns, capable of fattening well, and an ox of them has been found to weigh upwards of 3800 Ibs., while the cows give from 25 to 30 quarts of milk daily for several months. The Cheviot sheep walk the uplands, and the Tees Water sheep, a good, short-horned, long-woolled breed, walk the lowland pastures. Farm buildings on the average are of middle-rate character, and a bread called maslin, a mixture of wheat and rye, is a common diet.

Trout abounds in the rivers, salmon also is caught, and dog-fish, seal, porpoise, grampus, conger-eel, pilchard, herrings, cod, ling, haddock, whiting, sole, turbot, and mackerel are found in the sea off the coast. The main line of railway for the east coast of Britain traverses the county through nearly its greatest length and its most populous tracts; the Newcastle and Carlisle railway traverses part of its northern border; numerous railways traverse its interior in connection with the main line and with one another, so as to form a network of communication from all the principal parts of the coast to the principal parts in the west.

The county, as already noted in our article on the city, was formerly governed by the bishop, but it is now governed by a lord-lieutenant and a county council consisting of 72 councillors and 24 aldermen. It is in the north military district, and in the northern judicial circuit. The assizes and the quarter sessions are held at Durham.

The territory now constituting Durhamshire was inhabited by the Brigantes or "hill people," afterwards formed part of the Roman Maxima Cæsariensis, and, afterwards was included in the Saxon kingdom of Northumbria. It mainly lay for a time between the Northumbrian provinces of Deira and Bernicia, being then for the most part a forest, yet belonged more properly to Deira than to Bernicia. These two provinces were first separate, then united, then again separate, and they precipitated upon the Durham territory much of the evils which arose both from their own vicissitudes and from Danish invasion. Two bishoprics were founded in Bernicia toward the close of the 7th century—at Hexham and at Lindisfarne—while the bishopric of York included Deira; yet both of the Bernician bishoprics became extinct, or rather transferred their seat, through Chester-le-Street to Durham, with the effect of making that city the permanent centre of prelatic role over all Durhamshire and Northumberland. The new bishopric, as noted in our article on the city, acquired extraordinary powers during the Norman period, became a county-palatine, and maintained itself very much in the manner of a kingdom. The bishops suffered calamity most by frequent incursions of the Scots, but they convoked parliaments, raised armies, maintained fortalices, and levied taxes very much as if they had been sovereigns, and were able generally to repel the enemy or to subdue him. But in 1640, during the Parliamentary war, a Scottish army took possession of Northumberland and Durham, obliged the then bishop to flee to Stockton, thence to York and London, never to return, and drove all the affairs of the diocese into a state of abeyance till 1660. The Roman Watling Street went northward through the county by way of Wolsingham, and sent off a branch from Lanchester through Chester-le-Street to South Shields. Roman stations were at Brandon Camp, Pierce Bridge, Binchester, Lanchester, Ebchester, Castle's Camp, and Maiden Castle. The chief architectural antiquities are Barnard Castle, Auckland Castle, Brancepeth Castle, Evenwood Castle, Hylton Castle, Lumley Castle, Raby Castle, Ravensworth Castle, Witton Castle, Durham Castle, Durham Cathedral, Auckland Church, and remains of Jarrow Priory, Finchale Priory, and Nesham Nunnery.

The following, according to the Redistribution of Seats Act of 1885, are the parliamentary divisions of Durham, which do not appear under any specific name;—

The Chapman code for Durham is DUR.
Chapman codes are used in genealogy as a short data code for administrative areas, such as county and country names.

We have some of the County Durham Parish Registers transcribed in fully searchable collections. See what we have available on the Births & Baptisms, Marriages, Deaths & Burials pages.

List of Registration Districts in County Durham from 1837 to 1974.

The Historical Directories web site have a number of directories relating to county Durham online, including:
Kelly's, Pigot, Slater, etc.

We have transcribed the entry for Durham from the following:

A listing of the Wards in County Durham, with the parishes contained in them.

The Return of Owners of Land in 1873 for County Durham is available to browse.

Old map of Durham circa 1895 (Gazetteer of England and Wales)

A listing of the Poor Law Unions in County Durham, with the parishes contained in them. 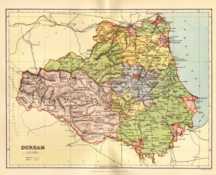