Dorsetshire or Dorset, a maritime county bounded on the NW by Somerset, on the NE by Wilts, on the E by Hants, on the S by the English Channel, and on the W by Devonshire. Its outline is very irregular. Its greatest length, from east to west, is 52 miles, its greatest breadth 37 miles, its circuit about 180 miles, its area 632,272 acres. The surface, in a main degree, is hilly and bleak, consisting of chalk downs and sandy heaths, yet possesses the charms of wild scenery, extensive prospects, and beautiful shores. The loftiest points are Swyre Hill, Black Down, and Pillesdon Pen, respectively 669, 813, and 934 feet high. The coast is about 75 miles long, presents much diversity, and includes the singular promontory called the Isle of Portland. The chief rivers are the Stour, the Frome, the Piddle, the Ivel, the Cerne, and the Brit. Mineral springs are at Sherborne, Chilcombe. Nottington, and some other places. Lias rocks, chiefly dark blue clays studded with ammonites and the bones of vast reptiles, are in the west; lower and middle oolite rocks, including interior oolite, fuller's earth, great oolite, forest marble, corn brash, Oxford clay, calcareous grit, and coral rag, adjoin the lias from Somerset to the sea; upper oolite rocks, Kimmeridge clay, Portland stone, and Purbeck limestone prevail in the isles of Portland; and Purbeck upper greensand skirts the escarpments of two great ranges of downs, and rises into the mass of Pillesdon Pen; chalk forms the main bulk of the downs, in the one case with a breadth of from 10 to 18 miles, in the other with an average breadth of barely 2 miles, and is the most prominent geological feature in the county; and tertiary deposits, chiefly the sands of the plastic clay, stretch in barren heaths between the two ranges of downs, from Poole to Dorchester. Bad stony coal, coarse marble, pipeclay, the Portland stone, the Purbeck limestone, and good potter's clay are worked, the last three to a great extent, for exportation.

Wheat and barley are much cultivated on the best soils, the latter for malting; potatoes and beans are grown as alternating crops on the good soils, and sainfoin and turnips on the chalk; hemp for oil and oil cakes is raised near Bridport and Beaminster, and hops are cultivated on a few spots. Salt butter, of such quality as when well washed to be sold for fresh, is sent to the London market; and skimmed milk cheese, streaked and known as double Dorset, is made for home consumption. Cattle are reared both for the dairy and for grazing. Short-woolled sheep, of the Down and Southdown breeds, crossed with the Leicesters and others, are famous for early lambs. A small breed, equal to the Bagshot and the Welsh, occurs in Portland and Purbeck.

The only mineral of importance found in the county is potter's clay, of which the annual production is over 70,000 tons, valued at about £25,000. There are manufactures, of flax, thread, hemp, cordage, sailcloth, woollens, worsted stockings, and gloves. Fisheries of various kinds, but most largely of mackerel, are carried on along the coast, particularly near Abbotsbury and from Portland to Bridport. The county has good railway facilities by means of the G.W.R., L. & S.W.R., and Somerset and Dorset lines.

For parliamentary purposes, the county is divided into four divisions—North, East, West, and South. There are eight municipal boroughs—viz., Blandford Forum, Bridport, Dorchester, Lyme-Regis, Poole, Shaftesbury, Wareham, and Weymouth. It has one court of quarter sessions and nine petty-sessional divisions. There are 28 civil parishes; 254 ecclesiastical parishes and districts, and parts of five others. The county is governed by a lord-lieutenant, and a county council consisting of 57 councillors and 19 aldermen. It is in the south-western military district, and the western judicial circuit. The assizes and the quarter sessions are held at Dorchester. The county jail also is there. Population, in 1801, 114,452; in 1821, 144,930; in 1841, 175,054; in 1861, 188,789; in 1891,194,517.

The territory now forming Dorsetshire belonged to the ancient British Durotriges and Morini, was included by the Romans in their Britannia Prima, and formed part of the Saxon kingdom of Wessex. The Danes invaded it, particularly in 833, 876, and 1002, and had battles with the Saxons in these years at, respectively, Charmouth and Dorchester. The Spanish Armada was routed off Portland in 1588, and Van Tromp beaten in 1653. The side of the King was taken by most of the higher classes in the wars of Charles I., and that of the Parliament by the working classes. The Duke of Monmouth landed at Lyme-Regis, and was taken near Horton after the battle of Sedgmoor. The county gave the title of Duke of Dorset to the family of Sackville. Ancient British remains, variously Druidical circles, hill-camps, and large barrows, occur at Pokeswell, Portisham, Winterbourne, Badbury-Rings, Hamildon-Hill, Hod-Hill, and Nine-barrow-down. The Ridge Way traversed the county from south to north, and the Via Iceniana from east to west. A Roman amphitheatre, perhaps originally British, is in the vicinity of Dorchester, and Roman stations were at Dorchester, Charmouth, Lyme-Regis, Wimborne-Minster, Weymouth, Wareham, and Poole. Ancient castle ruins are at Corfe Castle, Portland, and Brownsea. About forty abbeys, priories, and other monastic houses, besides some large fine churches, stood dispersed throughout the county, and interesting specimens of ancient ecclesiastical architecture, variously entire and ruined, occur at Wimborne-Minster, Sherbome, Stanwich, Bindon, Cerne-Abbas, Cranborne, and Shaftesbury.

The Chapman code for Dorset is DOR.
Chapman codes are used in genealogy as a short data code for administrative areas, such as county and country names.

We have some of the Dorset Parish Registers transcribed in fully searchable databases. See what we have available on the Baptisms, Marriages, Burials pages.

The Historical Directories web site have a number of directories relating to Dorset online, including:
Kelly's, Pigot, Slater, etc.

We have Kelly's Directory of Dorset, 1935 available to browse.

We have transcribed the entry for Dorset from the following:

A listing of the Hundreds and Liberties in Dorset, with the parishes contained in them.

Old map of Dorset circa 1895 (Gazetteer of England and Wales)

A listing of the Poor Law Unions in Dorset, with the parishes contained in them.

The Visitation of Dorsetshire, 1623 is online. 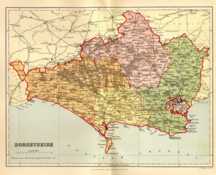