Devonshire or Devon, a maritime county, bounded on the N by the Bristol Channel, on the NE by Somerset, on the E by Dorset, on the SE and S by the English Channel, on the W by Cornwall. Its length southward is 72 miles, its greatest breadth 68 miles, its aggregate of coast-line about 144; miles, its total circuit about 280 miles, its area 1,661,914 acres. The only English counties which exceed it in size are Yorkshire and Lincoln.

The surface is exceedingly diversified, and exhibits a vast amount of picturesque scenery. The coasts for the most part are rocky and abound in striking scenes. North Devon, comprising one-fourth or more of all the area, has moorish, mountainous grounds on the east, and some moors and heights on the west, but presents over the most part a rich display of varied contour, fertility, and beauty. West Devon, a much. smaller tract in the south-west, is characterised by narrow vales, deep valleys, and steep flanking banks. Dartmoor, immediately east of this, is a wondrous region of mixed. grandeur, ruggedness, desolation, and romance. The South Hams, extending from Devonport to Torbay, blends with the finest skirts of Dartmoor, and spreads away to the sea in bold swells, winding coombes, and rich vales. East Devon, lying between Dartmoor and Dorset, is prevailingly champaign in the centre and the south, billowy or hilly in the east, sweetly beautiful in many parts, and moorish and mountainous in the north-east. The chief rivers, all more or less estuarial and navigable, are the Taw, the Torridge, the Tamar, the Tavy, the Plym, the Yealme, the Erme, the Avon, the Dart, the Teign, the Exe, the Otter, and the Axe. The chief bays in the north are Morte and Bideford; in the south, Plymouth, Start, and Tor. Springs, brooks, and rivulets abound more than in any other English county, and there are chalybeate spas at Bellamarsh, Bampton, Brixham, Cleaves, and Ilsington.

Granitic rocks occupy Dartmoor, old red sandstone or Devonian rocks form the northern part of North Devon, and most part of West Devon and South Hams; lower carboniferous rocks, limestone and shale, form a belt along the north side of Dartmoor, and a broader band thence to ths western boundary; upper carboniferous rocks, chiefly millstone grit, occupy most of the western, central, and southern parts of North Devon, and extend thence to Chudleigh, the neighbourhood of Exeter, Tiverton, and the boundary near Wellington; new red sandstone rocks occupy the southern and central parts of East Devon, and form a belt westward, past Crediton, to the vicinity of Hatherleigh; lias rocks form a small tract on the eastern border round Axminster; and upper greensand and gault rocks form considerable tracts, interspersed with the new red sandstone in the eastern parts of East Devon. Granite, building-stone, paving-stone, slate, and. limestone are extensively quarried. Marble of good quality is found in some places, and worked into numerous articles. Porcelain clay, pipe clay, and gypsum largely occur, and the first is sent to the Worcester and Stafford potteries. Tin, copper, lead, and iron ores are worked. Silver exists largely in the lead ores, and some gold, cobalt, manganese, and antimony are found. Bituminous coal has been vainly searched for, but lignite coal and anthracite are found and worked.

The soils include little alluvium, and derive their character generally from the underlying rocks. Those of Dartmoor are very poor; those of North Devon are mainly pure yellow or white clays, and partly a clayey loam; those of South Hams vary in frequent changes from a heavy clay to a light calcareous earth, and are so fertile as to have occasioned the region to be called the garden of Devonshire; those of the tracts round Crediton, Exeter, and Honiton, are chiefly rich loams, either sandy or dark hazel; and those of other tracts are for the most part good, indifferent, or bad, according to the nature of the subjacent rocks. The farms range mostly from 100 to 200 acres, and leases run from 6 to 10 years. Butter, cheese, cider, and live stock are the chief produce for exportation. The bovine cattle are a wide-horned red or light-brown breed, excellent both for working and for fattening, but not much esteemed for the dairy; the sheep are of many kinds, but largely a middle-woolled small breed, very similar to the Dorsets, and the native horses are small animals, resembling the Welsh and the Highland breeds. Mackerel, herrings, and other fish are largely caught.

The chief mineral products of the county are arsenic, of which the output is about 2500 tons a year, and value about £24,000, arsenical pyrites (output over 3000 tons), copper ores (nearly 3000 tons), iron ore and manganese ore (each about 800 tons), and lignite (about 4000 tons). There is besides a very large production of potter's and China clays, amounting in the aggregate to 128,000 tons, valued at nearly £60,000 yearly. Manufactures in coarse woollens, worsteds, carpets, silks, linens, cottons, lace, gloves, shoes, and earthenware, are carried on.

Devonshire is connected with the canal system by the Great Western Canal from Taunton to Somerset, passing by Tiverton to Exeter. The Tavistock Canal, the Stover or Teingrace Canal, and the Torridge Canal are small canals to extend river navigation. The Bude and Holsworthy Canal connects the Bude and Launceston Canal with the river Waldon. The harbours are very fine and numerous. The county is traversed by more than 7200 miles of roads; and connected with the G.W.R. by the Bristol and Exeter line, which extents along the coast, under the name of the South Devon Railway, to Cornwall. There are branches from Newton to Torquay and Dartmouth, and from Taunton to Barnstaple. There are also the London and South-Western and the North Devon and the West Cornwall railways.

For parliamentary purposes the county is divided into eight single-member divisions, viz. :—East (Honiton), northeast (Tiverton), north (South Molton), north-west (Barnstaple), west (Tavistock), south (Totnes), Torquay division, and Mid (Ashburton). It also includes the parliamentary boroughs of Devonport, Exeter, and Plymouth. There are ten municipal boroughs (exclusive of the county boroughs of Devonport, Exeter, and Plymouth), viz., Barnstaple, Bideford, Dartmouth, Honiton, Okehampton, South Molton, Tiverton, Torquay, Torrington (Great), and Totnes. There are 28 petty sessional divisions. The county contains 451 entire civil parishes and part of one other. Devonport contains one entire civil parish, Exeter 22 parishes, and Plymouth two. There are 506 entire ecclesiastical parishes or districts and parts of five others. Tlie county is almost entirely in the diocese of Exeter. It is governed by a lord lieutenant, and a county council consisting of 78 councillors and 26 aldermen, and is in the western military district, and the western judicial circuit. The assizes and the quarter sessions are held at Exeter. The county jail is at Exeter.

Devonshire was called Dyfnant by the ancient Welsh, and Dennan by the Cornish Britons, and is supposed to have got its name from a word signifying "deeps" or "glens." It was originally inhabited by the Cimbri, who got here the designation of Damnonii or Danmonii, and it had ancient commercial transactions with the Phœnicians, the Greeks, and other nations. It was included by the Romans first in their Britannia Prima, then in their Flavia Cæsariensis, and it afterwards formed part of the kingdom of Wessex. Cynegilsus, king of the West Saxons, vanquished it in 614. The Danes made inroads into it with various fortune in 806, 876, and 894. William the Conqueror met stiff resistance from it in 1067 and 1069. William Rufus and Stephen also were resisted at Exeter. The French, till the middle of the 16th century, made attacks on the maritime towns, but elicited few events of any note. The wars between the Yorkists and the Lancastrians agitated the county and caused several riots, but did not produce any battle. The Reformation caused an insurrection in 1549, leading to a number of armed engagements. The Civil War, in the time of Charles I., involved general broils, many incursions, several skirmishes, and one sharp action, and came to an end in the taking of most of the towns by Fairfax. The Prince of Orange landed at Torbay in 1688, the French fleet cannonaded and plundered Teignmouth in 1690, the combined fleet of France and Spain appeared off Plymouth in 1779, and Napoleon Bonaparte was a prisoner in the Bellerophon and the Northumberland men-of-war in Plymouth Sound in 1815. The county gives the title of Earl of Devon to the Courtenays, and that of Duke of Devonshire to the Cavendishes. Icknield Street crosses the county from Dorset through Exeter into Cornwall, the Fosse Way joined or crossed Icknield Street near the eastern border of the county, and the Port Way went from Exeter toward the centre of Somerset. Ancient British remains, variously cromlechs, Druidical circles, logan-stones, cairns, and vestiges of rude houses, are at Drews-Teignton, Withecombe, Haldon Hill, and Grimpspound; ancient camps are at Woodbury and Hembury; ancient castles are at Compton, Okehampton, Plympton, Tiverton, Berry-Pomeroy, and Lydford; ancient abbeys or priories are or were at Tavistock, Ford, Newnham, Tor, Wear, Weycroft, Frithelstoke, Hartland, Buckfastleigh, and Ottery; and ancient churches are at Ashburton, Axminster, Chegford, Crediton, Exeter, and other places.

The Chapman code for Devon is DEV.
Chapman codes are used in genealogy as a short data code for administrative areas, such as county and country names.

We have some of the Devon Parish Registers transcribed in fully searchable databases. See what we have available on the Baptisms, Marriages, Burials pages.

A listing of Seats of the Nobility, Clergy and Gentry in Devonshire

The Historical Directories web site have a number of directories relating to Devon online, including:
Kelly's, Pigot, Slater, etc.

We have transcribed the entry for Devon from the following:

A listing of the Hundreds and Liberties in Devon, with the parishes contained in them.

We have A View of Devonshire in MDXXX with a Pedigree of most of its Gentry by Thomas Westcote, Gent. available to browse. This contains a fascinating account of Westcote's travels through the county in 1630, and describes each place.

Old map of Devonshire circa 1895 (Gazetteer of England and Wales)

A part transcript of the Western Antiquary or Devon and Cornwall note-book.

A listing of the Poor Law Unions in Devon, with the parishes contained in them.

A list of transcripts of Will, Probate and Administration documents of Devonshire people. 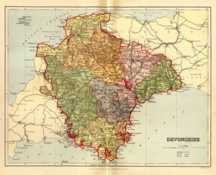