Northumberland, a maritime county in the N of England, bounded on the NW and the N by Scotland, on the NE and the E by the North Sea, on the S by Durham, and on the SW and W by Cumberland. Its outline is irregularly pentagonal, with a long side toward the NW, a short side toward the NE, and long sides toward the E, the S, and the W. Its boundary, on the NW side, is formed mainly by a watershed of the Cheviots and by the river Tweed; on the S side, mainly by the rivers Tyne and Derwent; and on part of the W side, by the river Irthing. Its greatest length, from N to S, is nearly 70 miles; its greatest breadth, from N by W to E by S, is about 50 miles; its circuit is about 225 miles-90 of which are along the Cheviots and 50 along the coast; and its area is 1,289,756 acres. It exceeds in size all the counties of England except York, Lincoln, Devon, and Norfolk. The Cheviots project far within the border; occupy great part of the parishes of Wooler, Kirknewton, Ilderton, Ingram, Alnham, Alwinton, and Elsdon; form masses grouped skirt to skirt, or shoulder to shoulder, like clustering cones, with dome-shaped summits; and rise to altitudes of from 1280 to 2658 feet. The surface from their base, eastward to the sea and south-eastward to the Tyne, may be described generally as a hanging plain, but consists largely of either low tableau or low plain. The tracts in the SW, to the extent of about 25 miles from Highfield and Hareshaw moors to the S border, and from 10 to 28 miles eastward from the W border, are chiefly moor and mountain, beautifully intersected by the valleys of the North Tyne, the South Tyne, and the Alien, much diversified also by verdant hills and hanging plains, and rising at or near the boundaries to altitudes of from 1000 to nearly 2000 feet. Much of the scenery is wild, bare, or monotonous, but much also is richly and variedly picturesque. The chief rivers are the Tweed, the Till, the Alne, the Coquet, the Wansbeck, the Blyth, the Tyne, and the Derwent.

We have some of the Northumberland Parish Registers transcribed in fully searchable collections. See what we have available on the Births & Baptisms, Marriages, Deaths & Burials pages.

The Historical Directories web site have a number of directories relating to Northumberland online, including:
Kelly's, Pigot, Slater, etc.

The Return of Owners of Land in 1873 for Northumberland is available to browse.

Old map of Northumberland circa 1895 (Gazetteer of England and Wales) 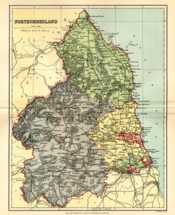