Kent, a maritime county, bounded, on the N by the Thames and the German Ocean, on the E by the Straits of Dover, on the SE by the English Channel, on the S by the English Channel and by Sussex, and on the W by Surrey. It is separated by the Thames from the metropolitan part of Middlesex and from all the S border of Essex, and by the river Rother and head streams of the Medway from parts of Sussex. It projects eastward from the main body of the SE of England in the form of a horn, corner, or cant, and it thence took its ancient or Iberian or British name, Romanized into Cantium and modernised into Kent. It is supposed to have anciently extended some miles further up the Thames than at present, and to have included there the site of the original London, which Ptolemy and Ravennas indicate as on the S side of the river, and it may not improbably in remote times have been united on the E to France, from which it is now about 24 miles distant. Its form is irregularly parallelogramic, extending from E to W. Its length is 64 miles, its greatest breadth 38 miles, its circuit about 190 miles, its area 995,344 acres, and its comparative largeness the ninth county of England, The population of the ancient county is 1,142,324; of the present administrative county, only 785,674, as many parishes south of the Thames are included in the county of London.

Shoals adjoin the N and E coasts, and are specially prominent in the Margate Sands off Margate, and in the Goodwin Sands off Ramsgate. Marshes form a belt, averaging about 1 1/2 mile in breadth, along great part of the Thames to the Swale; occur again in greater breadth between the Isle of Thanet and the mainland, and form the large tract of Romney Marsh, Dunge Marsh, and Walling Marsh in the extreme S, from the neighbourhood of Hythe to the boundary with Sussex. A tract of lower eocene formation, averagely three or four times broader than the Thames belt or marsh, extends parallel to it from Surrey to the Thanet Marsh; includes also the northern part of Sheppey island, is geognostically a continuation of what is called the London clay basin, and consists of London clay and plastic clay, or Woolwich beds and Thanet sand. A tract of upper cretaceous formation continuous with the North Downs extends parallel with the preceding, and of similar aggregate breadth, from Surrey to the neighbourhood of Waltham and Canterbury; goes thence, with rapidly increasing breadth, to the E coast; includes the parts of Thanet around Margate and Ramsgate, and forms the fine promontory of North Foreland and the grand cliffs, "the white walls of Albion," around Dover. Two belts of the gault and lower greensand group, the one very narrow, the other somewhat wider, extend immediately S of the upper cretaceous tract. A region of the lower cretaceous formation, chiefly Weald clay, but including some portions of Hastings sand, forms all the rest of the county, and is continuous with the Sussex Weald. The geognostic characters of most of the surface will be noticed in our article WEALD. No part of the county, except the marshes, is level, and most parts are hilly and abundantly wooded. The greatest height in the lower eocene tract is Shooter's Hill, 446 feet high. A range of chalk hills, sometimes called the Backbone of Kent, traverses the entire county from NW to SE, and culminates in Hollingbourne Hill between the Medway and the Stour, 616 feet high, and in Paddlesworth Hill near Folkestone, 642 feet high. Another range, called the Quarry Hills, runs parallel with the former, and has elevations rising to 800 feet, and commanding most beautiful views. An economical estimate of the county divides it into three regions—that of "health without wealth," embracing the higher parts of the Backbone; that of "wealth without health," embracing the marshes and the wooded parts of the Weald; and that of "health with wealth," embracing eminently the parts about Canterbury and the parts of the Medway's valley from Tunbridge to Maidstone, and more generally the greater part of the county. Fineness of scenery, mildness of climate, and richness as well as diversity of production, combine to render Kent eminently attractive. Hence does Drayton in the "Polyolbion," say—

"0 famous Kent!
What county hath this isle that can compare with thee?
That hath within thyself as much as thou can'st wish:
Thy rabbits, venison, fruits, thy sorts of fowl and fish;
As what with strength comports, thy hay, thy corn, thy wood,—
Nor anything doth want that anywhere is good."

The chief rivers, besides the Thames, are the Medway, the Stour, the Darent, the Cray, the Ravensbourne, the Rother, and the Ebbsfleet. Mineral springs are at Tunbridge Wells and other places. Land springs resembling the "lavants" of Sussex and Hants are in various parts of the chalk region; have an intermitting character, seemingly due to the cavernous nature of the substrata; break out chiefly after prolonged rains, and bear here the name of nailbournes—a word which is said to be a corruption of eelbournes, and to mean streams abounding with eels; yet the nailbournes are not remarkable for either the number or the size of these fish. Many fine trout and other fish are found in the rivers; oysters are largely cultivated at Whitstable, Queenborough, Rochester, and Faversham; shrimps are taken in large quantities at Gravesend and Ramsgate; soles, flounders, and other fish are caught at these places, and at Milton, Whitstable, Margate, Deal, Dover, and Folkestone; and fisheries of cod, herring, and mackerel are carried on in the adjacent seas. The Weald was once a great forest, chiefly of grand oaks, and tenanted mainly by deer and wild hogs. The oak still predominates in it, and this tree, as indigenous there, seems to explain why Gregory the Great requested that British timber might be sent to Rome for building the churches of St Peter and St Paul. The beech flourishes strikingly on the chalk, and occasionally attains here a very remarkable size, but whether it can be pronounced indigenous is doubtful. Stone for building is quarried in the ragstone range of hills. Limestone for road-making, for lime manure, and for stucco is found in beds of the greensand. Inferior lime for building, for manure, and for whiting, chalk for mending walls and for manure, and flints and sand for building and for stone fences are found in the chalk formation. Clay for bricks and coarse pottery, river sand for mortar, Roman cement, and copperas stone are found in the London clay and plastic clay-beds. Iron sand, in the wealden formation, was used till the 17th century for iron manufacture, but went into desuetude in consequence of the substitution of pit coal for billet-wood as fuel—a substitution which caused the manufacture in Kent to be superseded by the richer ores and the fuel of the northern counties.

The soils are various, and, in a general view, very fertile. That of the arable land in the Isle of Thanet is a light loam, on a chalky bottom, highly fertilized by artificial treatment; that of the Thames marshes is a clay, mixed with sea sand and small shells; while that of Romney Marsh is a fine, soft, rich loam and clay. That of the flat lands in the vicinity of Faversham, Sandwich, and Deal is a rich sandy loam, with diversified proportions of sand, and a stiff wet clay. That of the hop grounds, which extend from Maidstone to Canterbury and thence to Sandwich, is for the most part a rich deep loam, on a subsoil of deep brick earth. That of most of the Isle of Sheppey is a deep, stiff, strong clay; while that of the rest of the Isle is a rich, black, vegetable mould, on a substratum of the same clay. That of the upland farms, both in the E and in the W, is exceedingly various, ranging from clay, loam, and chalk, to intermixtures of these with flint, gravel, and sand. That of the Weald consists principally of clay in different degrees of tenacity and fertility. Rich marsh meadows, grazed by cattle and sheep, comprise about 11,500 acres on the Thames, the Medway. and the Swale, about 27,000 on the Stour, and about 44,000 on Romney Marsh, and extensive sheep downs are in the chalk region. Copyhold estates are very rare, and freehold estates are said to number about 9000, exclusive of the estates of ecclesiastical and corporate bodies. Gavelkind, a custom of Saxon origin, giving inheritance of land to all sons in equal proportions, or to all children with a certain share to the widow, seems always to have largely prevailed; and, though abolished over much of the county in the times of Henry VII. and James I., is still prevalent over a great aggregate of land. Farms average from 10 to 200 acres, leases run from 7 to 14 years, and farm buildings show much diversity of character.

The Historical Directories web site have a number of directories relating to Kent online, including:
Kelly's, Pigot, Slater, etc.

Old map of Kent circa 1895 (Gazetteer of England and Wales) 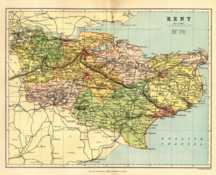