Gloucestershire, an inland, but partly maritime, county of England; bounded, on the NW, by Herefordshire and Worcestershire; on the N, by Worcestershire and Warwickshire; on the E, by Oxfordshire; on the SE, by Berks and Wilts; on the S, by Wilts and Somerset; on the W, by the Severn's estuary and by Monmouthshire. Its outline is somewhat elliptical, extending from NE to SW; but is narrower toward the NE than toward the SW. Its boundary consists partly of the river Avon, the Severn's estuary, and the river Wye, but is mainly artificial. Its greatest length is 60 miles; its greatest breadth is 43 miles; its circumference is, roughly, about 156 miles—or, following sinuosities, about 245 miles; and its area is 795,734 acres; population, 599,947. About 10 miles of its boundary, along the Severn, is coast. The surface comprises three parts or sections, eastern, central, and western, or hill, vale, and forest. The hill section extends from end to end of the county; is in some parts 8 miles broad; bears the name of Cotswolds; has a mean height of between 500 and 600 feet, with culminating summits of 1086 and 1134 feet; and is partly open down, more largely enclosed sheep-walk, but includes many winding dales, and possesses much good land and pleasant scenery. The vale section also extends from end to end of the county; lies mainly along the river Severn; spreads from the foot of the Cotswolds, partly to the western boundary, partly to the Severn's estuary; includes the vales of Evesham, Gloucester, and Berkeley, together with all the low lands from Tewkesbury to Bristol, and consists chiefly of fine land, variously arable, meadow, and pasture. The forest section is much the smallest of the three, lies on the W side of the Severn, consists chiefly of the Forest of Dean, and is varied throughout with hill and dale. The chief rivers, besides the Severn, the Thames, the Chum, the Coin, and the Wye, are the Upper or Warwickshire Avon, the Lower Avon, the Frome or Stroud-water, the Windrush, and the Leadon.

A middle oolite, comprising coral rag, calcareous grit, and Oxford clay, forms a small part of the Cotswolds, around Lechlade; a lower oolite, comprising cornbrash, forest marble, Bradford clay, Bath stone, fuller's earth, and inferior oolite, forms most of the Cotswolds, and considerable adjacent parts of the vale; a lias, comprising sand, upper lias clay, marl stone, and lower lias clay and lime, forms the greater part of the vale eastward of the Severn; a trias, comprising new red sandstone and keuper marl, forms a small portion of the vale east of the Severn and south of Tewkesbury, and most of the vale west of the Severn; an upper carboniferous formation, consisting of the coal measures, constitutes two considerable tracts, the one between Wickwar and Bristol, the other in the Forest of Dean; a lower carboniferous formation, comprising limestone and shale, constitutes tracts in the neighbourhood of Thornbury, in the neighbourhood of Bristol, and around the coal measures of the forest; an old red sandstone formation constitutes the rest of the forest; and a tract of alluvium extends along the Severn coast-line from the neighbourhood of Northwick to the Avon. Building stone and limestone abound, and are extensively worked. The chief mineral products are coal, of which the annual output exceeds 1,200,000 tons; iron ore, of which the output is about 60,000 tons; and fire-clay, 5500 tons. The manufacture of pig-iron (including that produced in Wiltshire), is nearly 35,000 tons. Lead ore also occurs, a little zinc, traces of strontian, and small quantities of various rare minerals. There are mineral springs at Cheltenham, Clifton, Walton, and Gloucester.

The soil of the Cotswolds is, in most parts, a shallow, calcareous loam, on a stratum of rubble, but in the depressions and bottoms, and sometimes on the hills, a stiff clay. The soil of the vale is, for the most part, an uncommonly rich deep loam, in some places black, in others red, sometimes incumbent on compact rock, but generally incumbent on blue clay. The soil of the forest is chiefly sand, in some places peat, in other places a thin limestone debris, generally not very fertile, yet not unfavourable to certain kinds of cultivation. The hill or Cotswold section has undergone vast improvement since the 18th century, now comprises much arable and enclosed pasture land, which formerly was open down, carries on cultivation of corn, with produce of from 16 to 20 bushels per acre, barley, with produce of 32 bushels, turnips, sainfoin, and other crops; has sheep farms of from 200 to 1000 acres pastured by a native breed, and generally is characterized by harvests a fortnight later than in the vale, and by stone-wall enclosures. The vale is disposed variously in arable land and dairy land, together with orchards, is intersected with elm, willow, and thorn hedges, grows wheat (with produce of from 24 to 28 bushels), barley (with produce of 40 bushels), beans (with produce of from 20 to 30 bushels), oats, turnips, potatoes, and other crops; includes meadows along the Severn below Gloucester, yielding from 2 to 2 1/2 tons of hay per acre; maintains a good native breed of cattle, whose milk yields from 3 to 4 cwt. of cheese per year, and also excellent butter, and maintains likewise a variety of breeds, chiefly the Staffordshire and Herefordshire. Calves and swine are numerously fed, and the swine now are chiefly the Berkshire and cross breeds. An orchard exists on almost every farm, and cider and perry are largely made. The forest section is noted principally for its timber, and for an excellent cider apple.

The complete set of Phillimore Marriages for Gloucestershire is online.

We have a database containing transcripts of marriage records for some parishes in Gloucestershire.

The parish registers for the Diocese of Bristol are available online at Ancestry, in association with Bristol Archives.

The Historical Directories web site have a number of directories relating to Gloucestershire online, including:
Kelly's, Pigot, Slater, etc.

Pigot's Directory of Gloucestershire, 1842 is available to browse online.

A listing of the Hundreds in Gloucestershire, with the parishes contained in them.

The Return of Owners of Land in 1873 for Gloucestershire is available to browse.

Old map of Gloucestershire circa 1895 (Gazetteer of England and Wales)

The Visitation of the county of Gloucester, 1623 is available on the Heraldry page. 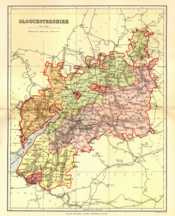