The parish church of St. Augustine is an ancient building of stone in the Early English style, consisting of chancel, nave, north aisle, south porch and an embattled western tower, with pinnacles, containing 6 bells, cast by Taylor, of Oxford, but undated: in the church are several monuments to the ancient family of Bassett: in the chancel is a canopied altar-tomb, with feathered arch; in the spandrils are the inter-twined letters R. C. and above the cornice are the arms of the Coffin family, supported by an angel; the inscription is lost, but the tomb is assumed to commemorate Richard Coffin esq. ob. 16th century, and his wife, a daughter of Sir Richard Chudleigh kt.: a tablet was erected in 1891, by the rector and fellows of Exeter College, Oxford, to the Rev. G. Hakewill, rector of this parish, archdeacon of Surrey and chaplain to Prince Charles, son of James I. ob. 1649, aged 72: the church was restored in 1889-90: the tower was restored and the bells rehung, at the cost of Sir W. Williams bart.; there is a stained window at the east end: a brass tablet set in oak was erected by Matilda Lady Williams, to her husband, Sir William Robert Williams (3rd bart.) and three sons: the church seats 230.

The parish register dates from the year 1584. 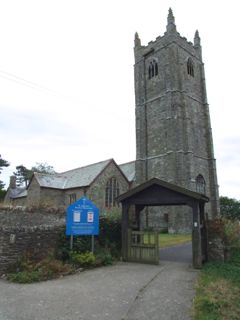