The parish church of St. George is a building of stone in the Gothic style, consisting of chancel, nave, south aisle, south porch and an embattled western tower containing 6 bells, all cast by Abel Rudhall, of Gloucester, in 1748, except the second, which dates from 1765: immediately in front of the chancel is an altar tomb with the recumbent cross-legged effigy of a knight in hauberk and mail armour, covered with a cyclas, or long-skirted garment, and carrying a shield; the figure is supposed to represent Sir Mauger St. Aubyn (de St. Albine), ob. 22 Edward I. (1294): there are other memorials to the family of Harriss: the stained east window is a memorial to the Rev. Francis Hole, formerly rector here, and there is a sculptured reredos by Hems, of Exeter: the organ was erected in 1881 as a memorial to Frances, wife of Rev. F. Hole: in 1876-7 the church was almost entirely rebuilt under the direction of the late Mr. Fowler, architect, of Louth, at a cost of £3,500, chiefly defrayed by T. Hole esq. and his relatives: in the churchyard is a tomb to Simon Gould and Julian, his wife, who died in 1817, in the 101st year of their respective ages, and the 75th year of their married life: there are 300 sittings.

The parish register of baptisms dates from the year 1540; marriages and burials, 1538. 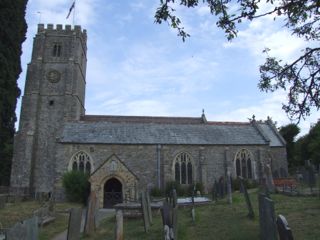