The parish church of St. Calixtus is an ancient cruciform building of stone, consisting of chancel, nave, transept, south porch and an embattled western tower, with pinnacles, containing a clock and 6 bells: in the north transept is an effigy of Sir John Wyatt kt. (also called le White or de la Wayt), a Justice of the Common Pleas from 1342 to about 1372; he was born at Stowford in this parish, about 1290, and the effigy, which represents him in the robes of a sergeant-at-law, was re-coloured in 1873; the figure of John (Tracy), his wife, is lost: the stained east window is a memorial to Mr. Robert Hole: in the chancel are two other stained windows to the Rev. H. J. Drury, a former vicar, and two members of the Davy family: the west window, a memorial to Grace, wife of James Bate, was given, in 1866, by Mrs. Fitzmaurice, her sister, who also erected a lych gate in the same year: the stained windows in the south transept are in memory of Mr. and Mrs. Anderton, of Trimstone: the font, a Norman work, was found under the floor during restoration: on the tower is a tablet recording its demolition in 1711 and rebuilding in 1712, at the cost of the parish, except a sum of £21, given by Sir Nicholas Hooper knt. of Fullabrook, who also at the same time presented the clock and its bells: the church was thoroughly restored in 1874, when the chancel walls were raised, the entire church newly roofed and re-seated with open seats and the chancel re-paved, at a total cost of £1,785: there are 250 sittings. In the churchyard is a grantite cross, erected in 1920 to the memory of the men of the parish who fell in the Great War, 1914-18.

The parish register dates from the year 1583.

Findmypast, in association with the South West Heritage Trust, Parochial Church Council, and Devon Family History Society have the Baptisms, Banns, Marriages, and Burials online for West Down 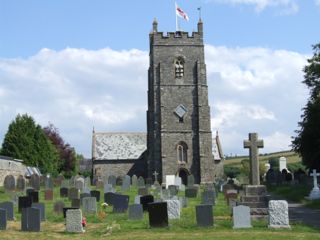