The parish church of St. Peter ad Vincula is a building of grey stone in the Early English and Perpendicular styles, consisting of chancel with north aisle, nave of three bays, north aisle, transepts, north and south porches and an embattled western tower of Perpendicular date, 100 feet in height, with four pinnacles, and containing a clock and 8 bells, recast by Taylor, of Oxford, in 1827, and Mears and Stainbank, of London, in 1922: the screen separating the chancel from the nave is particularly fine and has painted panels with figures of the Apostles: there is also a parclose screen and in the south transept a staircase to rood loft: in the chancel aisle is a mural monument with finely carved effigy to the wife of Thomas Ivatt, ob. 1634, and portions of carved oak benches; there is also a well-preserved brass to William Hancock esq. dated 1587, and seven stained windows, two of which, in the chancel, were painted by Mrs. Tyrrel, and another contains ancient glass formerly in an old window: in the vestry is an oak chest: in 1905 a new organ was provided as a memorial to the Rev. Humphry William Toms M.A. rector 1842-1904: in 1912 the screen was restored at a cost of about £330: new choir stalls were added in 1913 and new altar rails in 1914, the gift of A. B. Baldwin esq.: the church was restored in 1881, at a cost of £500, and has 450 sittings.

The parish register dates from the year 1736. 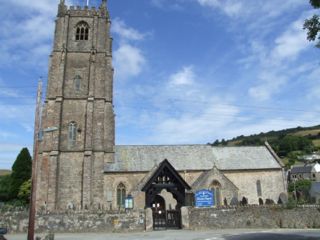