The parish church of St. Brannock is a large and ancient building of stone, in the Early English and Perpendicular styles, consisting of chancel and nave and transepts, north and south porches and a tower on the south side, with spire, containing a clock and 8 bells: the nave has a pannelled oak roof of considerable span, repaired about 1850, and exhibiting on one of its panels a carved representation of a sow with a litter of pigs, alluding to a tradition that St. Brannock, who preached Christianity here A.D. 550, was directed , in a dream, to build a church on the spot where he should first meet such a group: there is an interesting palimpsest brass, having on one side the effigy of a knight in bascinet and camail, c. 1200. and on the other the effigy of a lady kneeling at a prie-dieul this is inlaid above a stepped cross incised in a large stone slab, and at the foot is a brass inscription to Lady Elizabeth Bowcer (Bourchier), daughter of John, 1st Earl of Bath, and wife of Edward Chichester esq. ob. 24th August, 1548: the church contains some of the finest examples of wood carving in Devonshire, especially on the bench ends: the font is probably Norman: a new organ was erected in 1927 at a cost of £1,500, in the gallery of the north transept; some of the work by the celebrated Father Schmidt from the old organ, which stood in the south chancel aisle, was incorporated; this aisle has been restored and dedicated as a chapel: in 1887 the roof of the nave was restored and the bells rehung, with the addition of two new ones; the bells were again retuned and rehung in 1929, the 6th being recast: the south transept, formed by the ground storey of the tower, has been restored, in memory of Mr. Edward Mock, by his widow, and also the chancel, under the direction of Mr. Ewan Christian, architect: in 1909 the east and west windows were filled with stained glass: a war memorial, from the drawings of W. D. Car¨oe esq. was erected near the main entrance in 1921: there are 450 sittings. 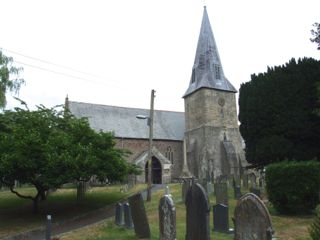