The church of St. John the Baptist is a spacious building of local limestone with Ham stone dressings in the Perpendicular style, erected about the middle of the 15th century (the crypt, probably part of an older church, dating from 1226): the church consists of chancel, nave of seven bays, aisles, transepts, south porch, organ chamber and a massive and lofty western tower with pierced parapet and containing 10 bells, the tenor weighing 2 tons 6 cwt.: the aisles, being nearly the same height as the nave, give a magnificent, effect, which is much increased by the great size of the windows; under the eastern part of the chancel is a crypt, of late Early English or Early Decorated work, and vaulted from a central pier: the chancel retains sedilia and an aumbry, and the font is a fine example of the Perpendicular style: there are brasses to Marton Forester, a monk, c. 1460, with half-effigy and two Latin verses, and one to Giles Penne, gent. c. 1519, and Isabel, his wife: there are also monuments to the Harbin, Batten and Newman families, and a marble bust of the Rev. Robert Phelips M.A. a former Vicar: the stained west window was erected by the inhabitants, as a memorial to H.R.H. the Prince Consort, who died Dec. 14, 1861; a fine organ was presented by Mrs. Mayo, in 1895, at a cost of £1,200, and reconstructed in 1904, at a cost of £850: the church has been restored since 1860, at a cost of £1,649, and affords sittings for 850 persons. 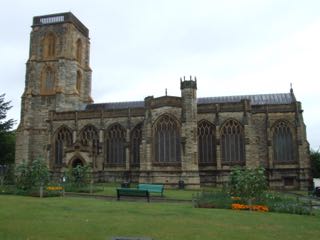 The register of St. John the Baptist dates from the year 1560.