The church of St. Michael the Archangel is a building of stone in the Perpendicular style, with traces of Early English and reputed Saxon work, consisting of chancel with chapels, clerestoried nave of five bays, aisles, north and south porches, over each of which is a parvise, and a western tower 100 feet high, with pinnacles, and containing a clock with chimes and 8 bells: the chancel is separated from the nave by a beautifully carved oak screen, the upper part of which has been restored at the cost of Mrs. A. Morrison: there are two chantry chapels, and in the south chapel is a brass to John Betteshorne, d. 1398: the present chancel and the chapels were built in the 14th century, but the tower dates from about the middle of the 15th century: there are 580 sittings: in 1883 the churchyard was levelled and planted with shrubs and flowers. 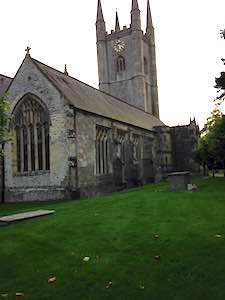 The registers are in a good state of preservation, and date from 1572, and the churchwardens' books, still preserved, date from 1556.

The Phillimore transcript of Marriages at Mere 1561-1812, Wiltshire is available to browse online.