The church of St. Andrew is a fine edifice of stone in the Decorated and Perpendicular styles, consisting of chancel, nave, aisles, south porch with parvise and a lofty western tower with pinnacles, containing a clock with two dials and chimes, the gift of Sir R. Harvey kt. placed in 1898, and bells, all cast by Thomas Bilbie in 1762, and re-hung, 1896, by Mr. Harry Stokes, of Woodbury, the 4th bell being at the same time re-cast by Messrs. Mears and Stainbank, London: the chancel retains three canopied stone stalls and a piscina, and there are two mural brasses on black marble, erected by the late Major Trist, of Tristford, in memory of his two sons, who died in India and the West Indies: the stone pulpit is octagonal, richly carved with foliage, and has figures of apostles in niches: the fine wood screen, 41 feet in length, and containing eleven bays exclusive of doors, was thoroughly restored at the cost of the late Mrs, Pendarves, of Tristford, about 1870, and there are two light parcloses: in 1896 new windows were erected on the south side to the memory of Major Trist; and a mural tablet erected to the Rev. R. Bartholomew, late vicar, who died April 18, 1896, after a residence of 37 years: the font is Anglo-Norman. In the churchyard is a large marble mausoleum belonging to the Harvey family, and surmounted by a tall cross; within are three marble sarcophagi, one of which contains the remains of Lady Harvey (wife); another that of Robert Godefroy (Tito), son and heir of Sir Robert Harvey kt. who died at school in 1895, and also bears a life-size recumbent effigy, executed by Hems, of Exeter; another contains the remains of Alfred Northey, third son of Sir Robert Harvey, and to each of these memorial windows have been placed in the church: in the churchyard also stands a cross, restored by Hems, at the cost of Sir R. Harvey: in 1898 a reredos, of alabaster and mosiac, was presented by the Hon. Mrs. and Miss Dorothy Jervoise Smith, who were responsible for the provision in 1904 of a new lectern and of new choir stalls in 1907: in 1911 the organ was rebuilt and re-erected in the Englebourne chapel, the western archway opened out, a new screen erected, and the gallery taken down. 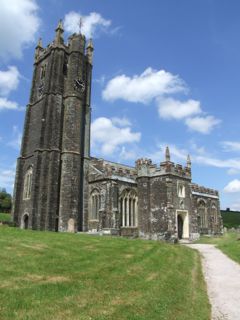