The church of St. Thomas à Becket, standing at the north end of the town, is an edifice of stone in the Perpendicular style, consisting of chancel, nave, aisles and an embattled western tower, with pinnacles, containing 6 bells; the tower was formerly surmounted by a spire, removed in 1785: the ancient and beautifully carved oak screen of the 15th century was restored in 1897 by Mr. Harry Hems, of Exeter, as a memorial to the late J. P. Margary esq, of Stoke Damarel: the church was partially restored in 1846, and again restored in 1878-86, at a cost of £2,200, when the chancel was rebuilt, and a north aisle added, divided from the chancel and nave by an arcade of six arches, three of which were taken from the ruins of the now disused church of South Huish: the ceiling of the south aisle was removed, exposing the oak roof, which is enriched with carving and bosses: the church was also reseated, and the font, an interesting work and the sole relic of the original building, re-erected on a base of Dartmoor granite: several windows of the new north aisle are stained, the west window in this aisle, formerly in South Pool church, being fitted with stained glass by the Duncombe Lodge of Freemasons: the stained east window, the gift of Capt. Strickland, of Dawlish, was dedicated by Bishop Knight Bruce in 1896: the organ was enlarged during the years 1889-93 and 1897 at a cost of about £700, and has now been completed, at a cost of over £1,000, and inclosed in a new carved oak case given by the lord of the manor: new clergy and choir vestries have also been added: the Welle chapel, on the south side, is now the property of the rectors, and has been converted by them into a lady chapel: in 1899 the oak screen was continued across the north chancel aisle, at the expense of Mr. Peter Bond: in 1900 marble steps, the gift of Mr. Tucker, were placed in the Sacrarium, and elaborately carved dwarf oak screens, given by Mrs. Lewis, placed at their head: the west window has been filled with stained glass, and also a window in the north aisle in memory of Mrs. Ingles: there are 500 sittings.

The earliest existing parish register dates from the year 1725, many ancient documents and registers having perished in a fire at Langwell House about 1830. 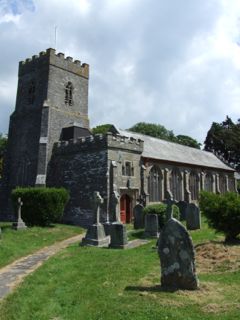