The church of St. Mary, built by the Pomeroys, is an ancient edifice of stone, chiefly in the Perpendicular style, but with remains of Early English and Decorated work, consisting of chancel, nave, aisles, south porch and an embattled western tower containing 8 bells, four dated respectively 1635, 1829, 1750 and 1607, two added in the year 1897, when the remainder were rehung and two others in 1909: in the north wall of the chancel is an altar tomb under a grained and canopied arch; the sides are panelled in quatrefoils, some of which have shields displaying the emblems of the Crucifixion; at the back of the arch are matrices of four kneeling effigies, four children and four shields, and two other carved shields of Pomeroy and Pomeroy impaling Denzell: this tomb commemorates Sir Richard Pomeroy kt, ob. 1501, and Elizabeth (Denzell), his wife: the east window of this aisle exhibits the arms of Pomeroy, Raleigh and Beaumont, and there is a memorial window to P. Bennitt esq. and one to the Rev. Arthur Joseph Everett M.A. vicar here 1861-1895: in the north aisle is a monument in the Elizabethan style, to Sir Edward Seymour bart, grandson of the Protector Somerset. ob. 11 Ap. 1613, his wife Elizabeth (Champernowne), and eleven children: in the chancel is a memorial tablet to the Rev. John Prince, author of "The Worthies of Devon" and 42 years vicar of this parish, who died in 1723, and in the north aisle is a brass inscription to Henry Dypforde, ob. 14 Oct. 1590, and Elizabeth, his wife: the foliaged capitals of the piers on the north side incorporate scrolls bearing the names of 7 persons and their wives who contributed to the rebuilding of this part of the church: the church also retains a fine oak screen. 46 feet in length and groined on both sides; it is of ten bays, with the original paintings and three doorways, but the doors are missing; there are also, two parcloses, with traces of colour: the south porch is groined and the bosses have the Pomeroy arms: in 1879 the interior was thoroughly restored at a cost of about £3,000 and again in 1900 at a cost of £120 and has 200 sittings: in the churchyard is the tomb of Archibald Algernon Seymour, 13th Duke of Somerset, d. 1891.

The parish register dates from the year 1600. 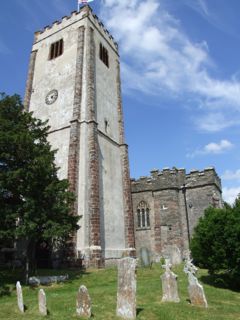