The church of St. Andrew is an ancient building of stone in the Perpendicular style, consisting of chancel, nave, aisles with arcades of five arches, south porch and a lofty embattled western tower, with pinnacles, containing a clock and 6 bells, all cast in 1770, by John Pennington, and re-hung in a new oak frame, and the tenor bell re-cast, in 1905: the fine carved oak roof displays two carved bosses, with busts representing an earl and countess of the Courtenay family of the 14th century: two others bear the figure of a boar and the arms of Courtenay: the rood screen was taken down in 1831 and no remains now exist: the church was restored in 1899 at a cost of £2,500, and affords 300 sittings.

The parish register dates from the year 1558. 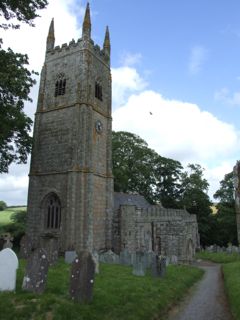