The church of St. Michael is an edifice of stone in the Decorated style, consisting of chancel, nave, aisles, south porch and an embattled western tower, 57 feet in height, with pinnacles and a lofty spire, and containing a clock and 6 bells, all cast by Abraham Rudhall, of Gloucester, in 1716, weight of tenor 14 cwt. 3 qrs.: the present tower was rebuilt in 1830; the old tower, a structure of peculiar shape, stood at the principal entrance on the south side, and in the year 1839 the top of the spire was blown down by a violent hurricane, and, falling through the roof, did considerable damage: the east window is stained, and in the south aisle is one erected by J. O. Moore-Stevens esq. of Winscott, at a cost of £150: the reredos, in sculptured stone, represents the Crucifixion: the alabaster font was presented in 1914 in memory of Margaret Cecil Jones, wife of the vicar, who died on June 30th, 1913: the west window, given by the Palmer family, cost £100; a window in the south side was placed to the memory of Mary Colby by her children, Frederic, Ellen and Reynolds, in 1863, and another in the north aisle was given by the representatives of the late Mr. Callon, of Torrington; in the transept is a window inserted by the Rev. Hugh Fowler, in memory of his father, Thomas Fowler, who died in 1843; two other memorial windows were placed in 1891 and several stained windows were placed in the church by the late Mr. W. F. Glubb: there are monuments to the Stevens family with a Latin inscription, dated 1676, and to John Palmer, d. 1770: the carved oak pulpit is that in which John Howe M.A. the celebrated Nonconformist divine, preached while vicar of this parish, until his ejectment in 1662: the organ was presented in 1809 by the late Lord Rolle, and in 1892 a handsome brass cross was given by Messrs Yeo and Binnore: under the Bible desk are these words, carved in the wood - "Heare God's word": on a stone, let into the wall outside the church, is the following inscription: - "The church was blown up with powder, Feb. 16th, Ano. 1645 and rebuilt Ao 1651": the church was restored in 1864 and has 1,200 sittings.

The parish register dates from the year 1616, and contains a number of entries relating to the burials of officers and soldiers slain during the civil war. 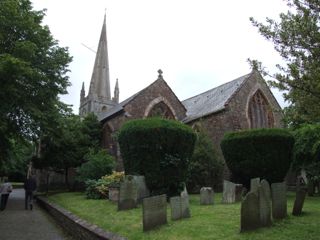