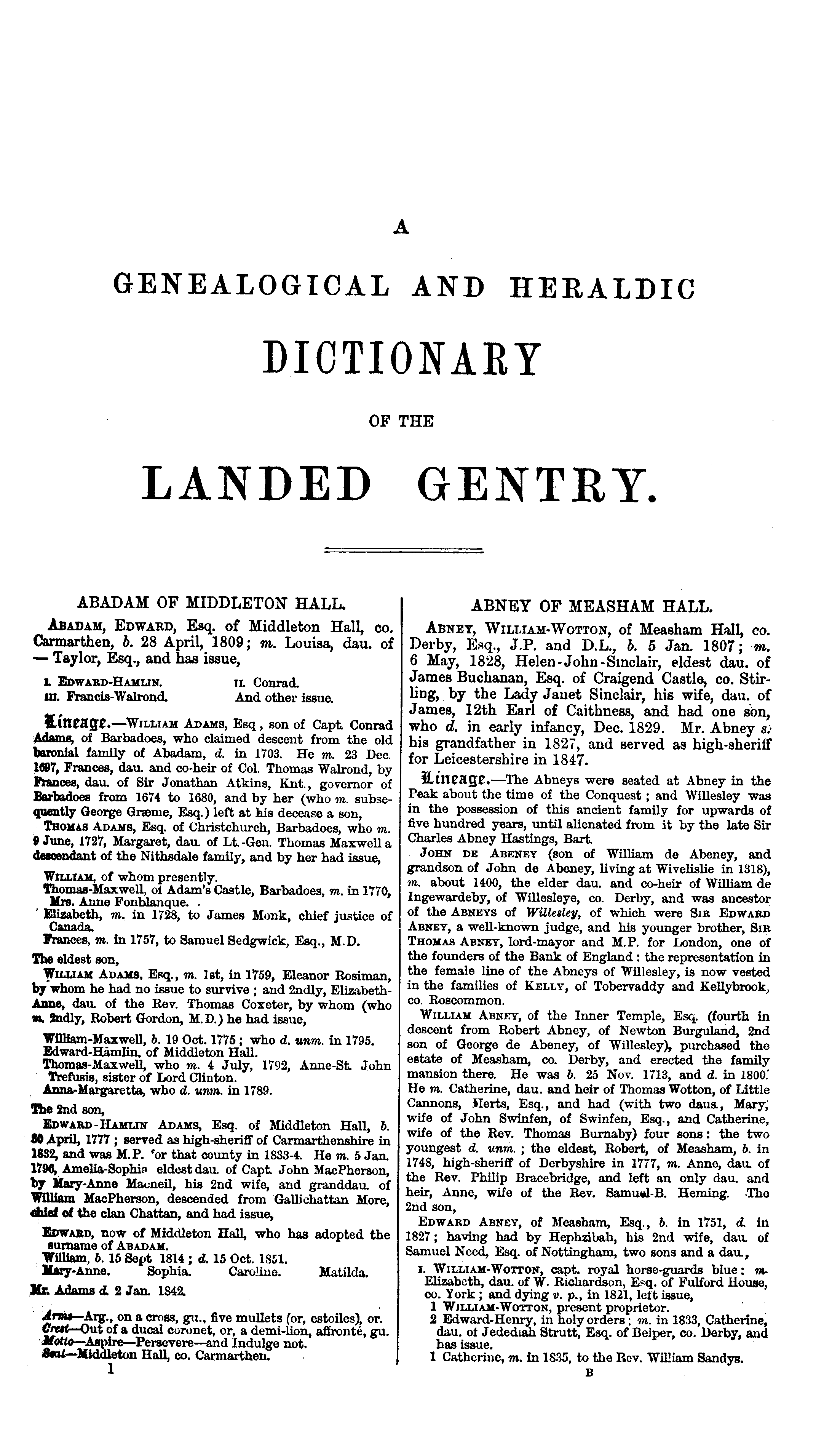 Lineage.-WILLIAM ADAMS, Esq, son of Capt, Conrad Adams of Barbadoes, who claimed descent from the old baronial family of Abadam, d. in 1703. He m. 23 Dec. 1697, Frances, dau. and co-heir of Col. Thomas Walrond, by Frances, dau. of Sir Jonathan Atkins, Knt., governor of Barbadoes from 1674 to 1680, and by her (who m. subsequently George Graeme, Esq.) left at his decease a son,

THOMAS ADAMS, Esq. of Christchurch, Barbadoes, who m. 9 June, 1727, Margaret, dau. of Lt.-Gen. Thomas Maxwell a decendant of the Nithsdale family, and by her had issue,

EDWARD-HAMLIN ADAMS, Esq. of Middleton Hall, b. 30 April, 1777; served as high-sheriff of Carmarthenshire in 1832, and was M.P. for that county in 1833-4. He m. 5 Jan. 1796, Amelia-Sophia eldest dau. of Capt. John MacPherson, by Mary-Anne Macneil, his 2nd wife, and granddau. of William MacPherson, descended from Gallichattan More, chief of the clan Chattan, and had issue,

Lineage.-The Abneys were seated at Abney in the Peak about the time of the Conquest; and Willesley was in the possession of this ancient family for upwards of five hundred years, until alienated from it by the late Sir Charles Abney Hastings, Bart.

JOHN DE ABENEY (son of William de Abeney, and grandson of John de Abeney, living at Wivelislie in 1318), m. about 1400, the elder dau. and co-heir of William de Ingewardeby, of Willeslaye, co. Derby, and was ancestor of the ADNEYS of Willesley, of which were SIR EDWARD ABNEY, a well-known judge, and his younger brother, SIR THOMAS ABNEY, lord-mayor and M.P. for London, one of the founders of the Bank of England: the representation in the female line of the Abneys of Willesley, is now vested in the families of KELLY, of Tobervaddy and Kellybrook, co. Roscommon.

WILLIAM ABNEY, of the Inner Temple, Esq. (fourth in descent from Robert Abney, of Newton Burguland, 2nd son of George de Abeney, of Willesley), purchased the estate of Measham, co. Derby, and erected the family mansion there. He was b. 25 Nov. 1713, and d. in 1800. He m. Catherine, dau. and heir of Thomas Wotton, of Little Cannons, Herts, Esq., and had (with two daus., Mary; wife of John Swinfen, of Swinfen, Esq. and Catherine, wife of the Rev. Thomas Burnaby) four sons: the two youngest d. unm.; the eldest, Robert, of Measham, b. in 1748, high-sheriff of Derbyshire in 1777, m. Anne, dau. of the Rev. Philip Bracebridge, and left an only dau. and heir, Anne, wife of the Rev. Samuel-B. Heming. The 2nd son,